Nearly a decade after the original Bravo television Queer Eye aired its final episode, Netflix announced a reboot of the popular series and, unless you have been living under a rock or have been stranded on a deserted island, there is no way you could have missed the sensation this new “Fab Five” have created!  Full disclosure, I admit that (earlier this past summer) I had been in the minority of people who had not yet watched Queer Eye.  Then the Fab Five hit Kansas City in July, to film Season 3 of their hit series, an my Instagram blew up! I saw daily posts upon posts of local sightings and overwhelming excitement surrounding these gentlemen’s descent into our city.  The energy around their arrival was contagious!  So, I hunkered down one evening with some Cabernet to watch Queer Eye and find out for myself what all the fuss was about.

In the first episode I watched, “God Bless Gay” with the wonderful Miss Tammye, I laughed, mostly cried, and fully became hooked.  The Fab Five, consisting of Culture Expert – Karamo Brown, Fashion Expert – Tan France, Grooming Consultant – Jonathan Van Ness, Food and Wine Expert – Antoni Porowski and Interior Designer – Bobby Berk, take the viewer on such a fun, emotional, positive and uplifting ride on each episode while creating a profound impact on the lives of the individuals with whom each show centers.  While all of the men have an equally vital and important role in each episode, I must admit that is was often the work of Bobby Berk that captured my attention the most (possibly due to the fact that I write a home decor blog? hmmmm..) 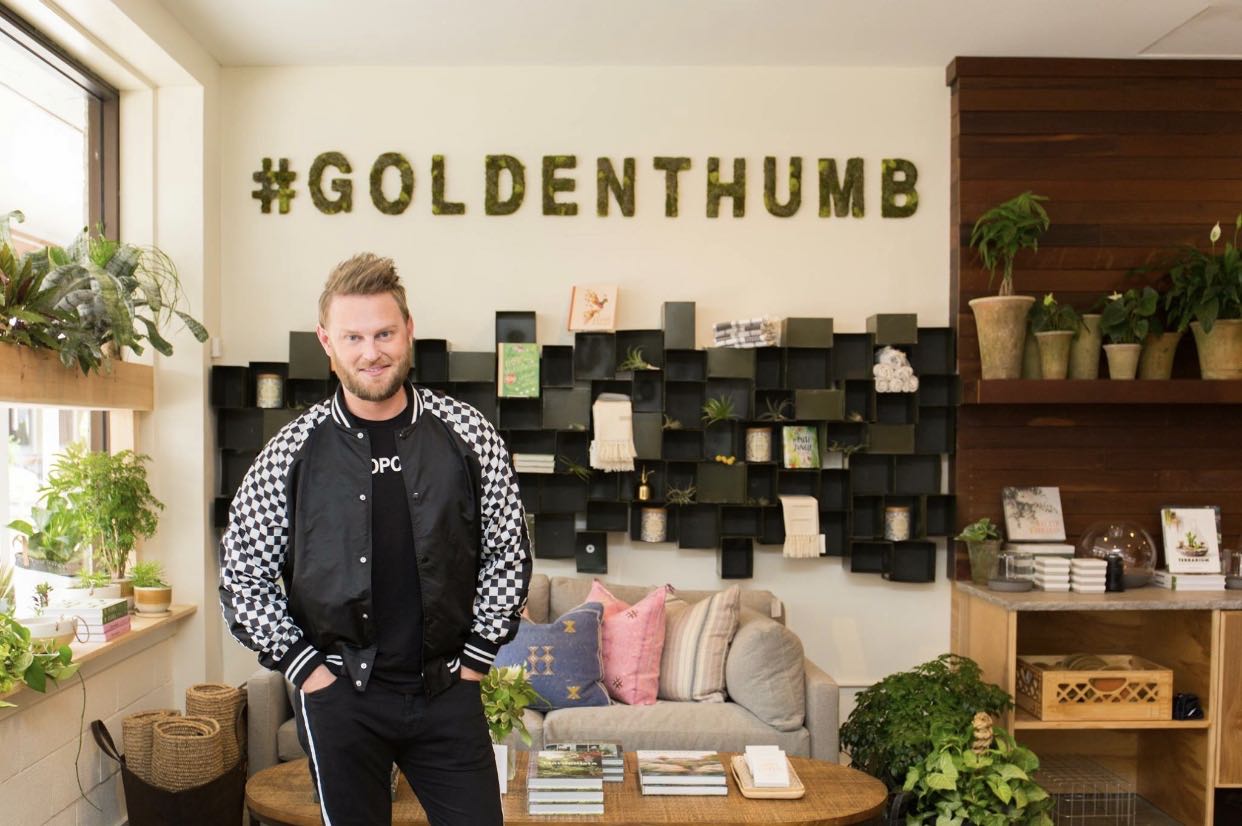 Fast forward to the grand re-opening of Golden & Pine in August where owner, Stephanie Agne, and I talked about a few of the upcoming events she had planned for the shop in their new space and one very top-secret event in the works was a speaking engagement featuring Bobby Berk!  Last week that plan became a reality as Golden & Pine and Caffetteria co-hosted Bobby Berk and over 400 fans at the Prairie Village Shops. 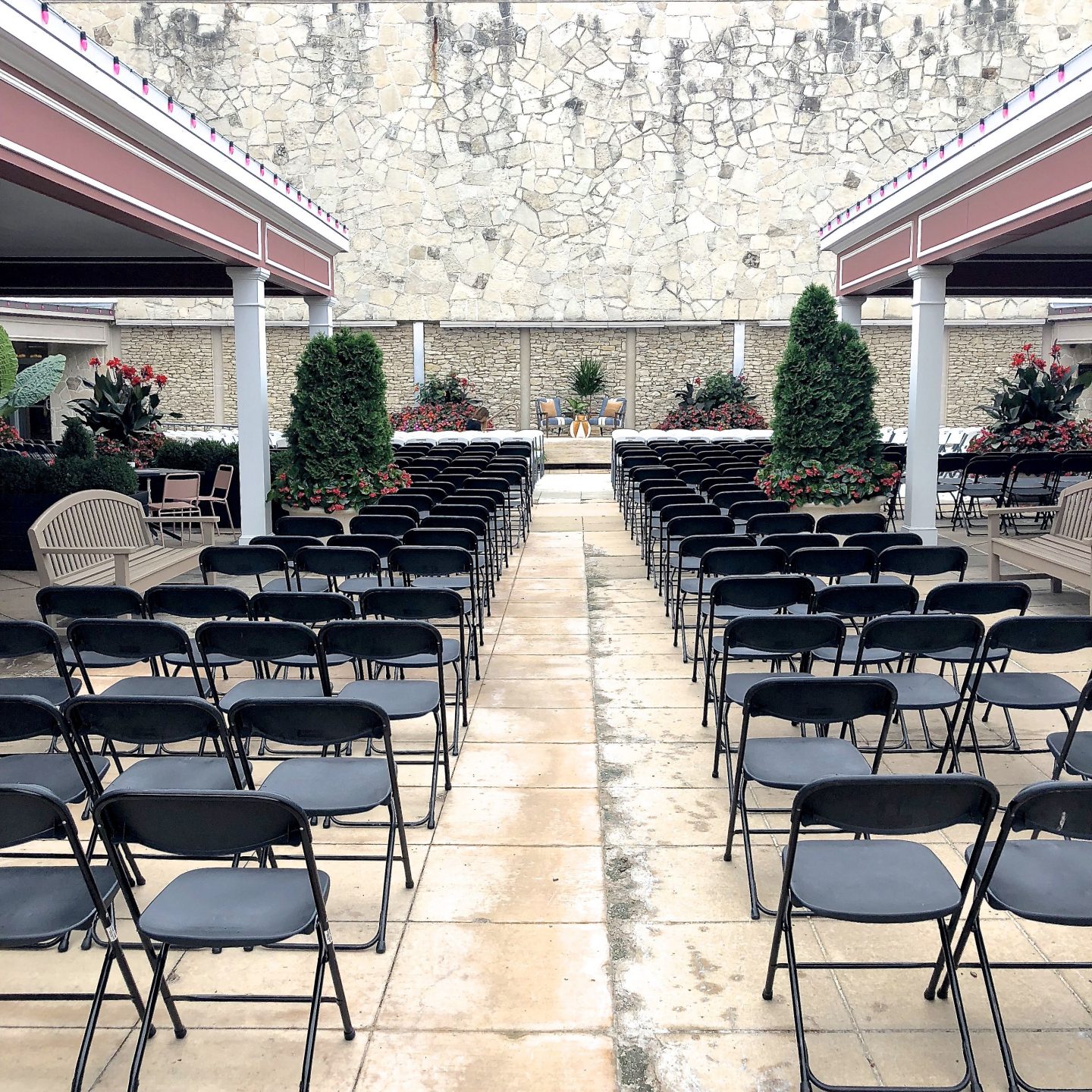 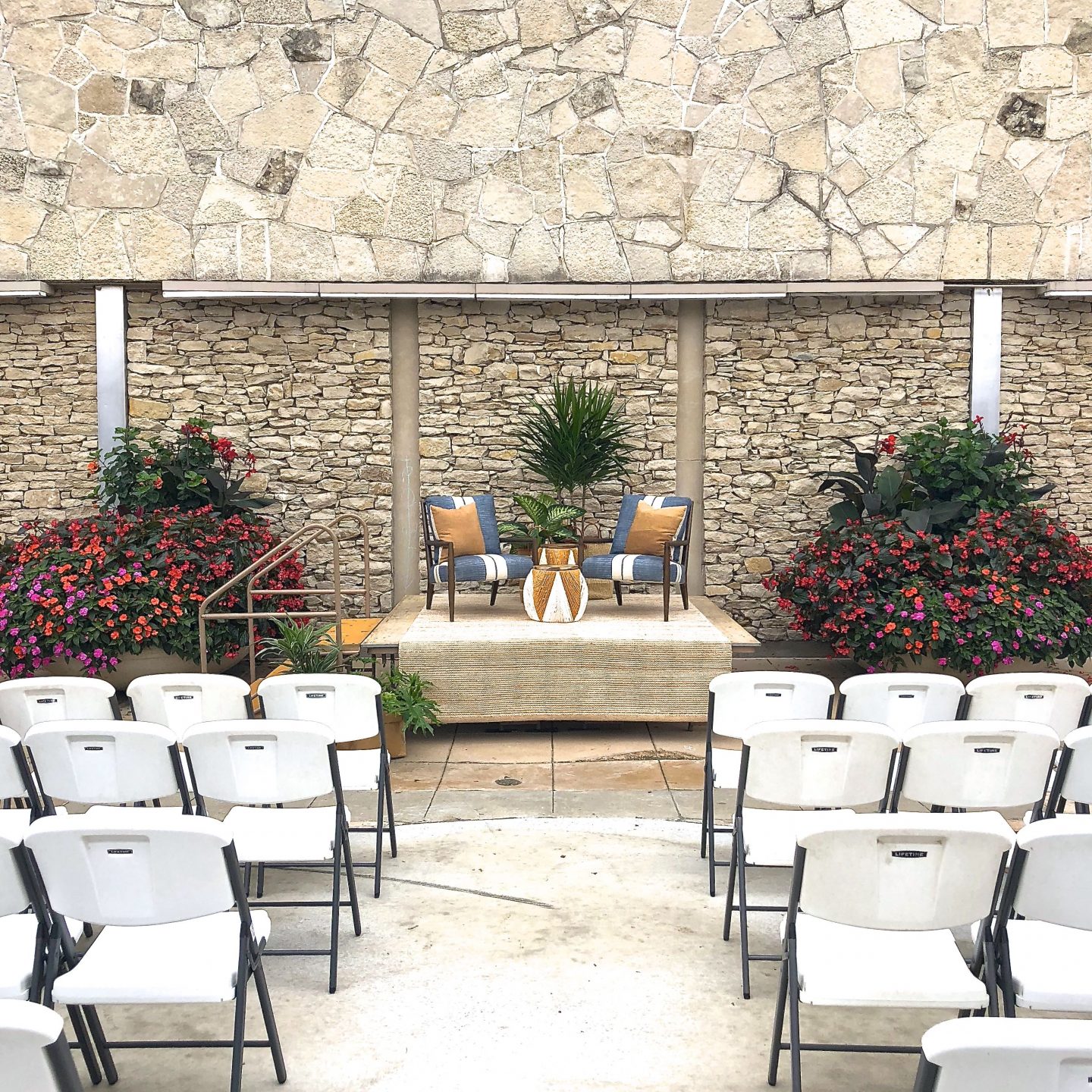 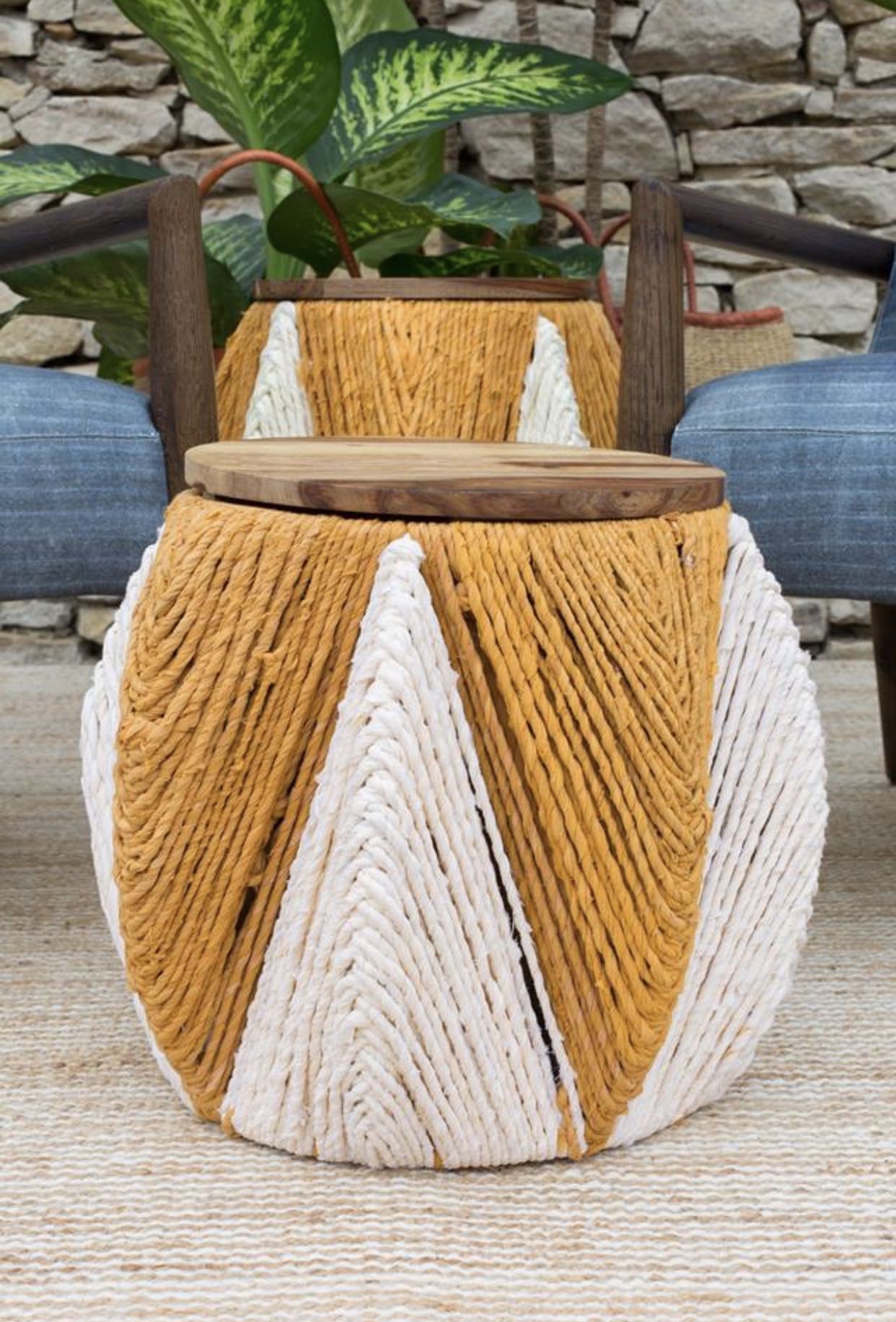 Excitement was high as tickets to the event sold out in under 2 hours.  If you were one of the lucky ticket holders to the event, you may have seen me greeting entrants at the front door.  Having the opportunity to work at this event gave me an all-access pass of sorts and I now get to bring my recap to you! 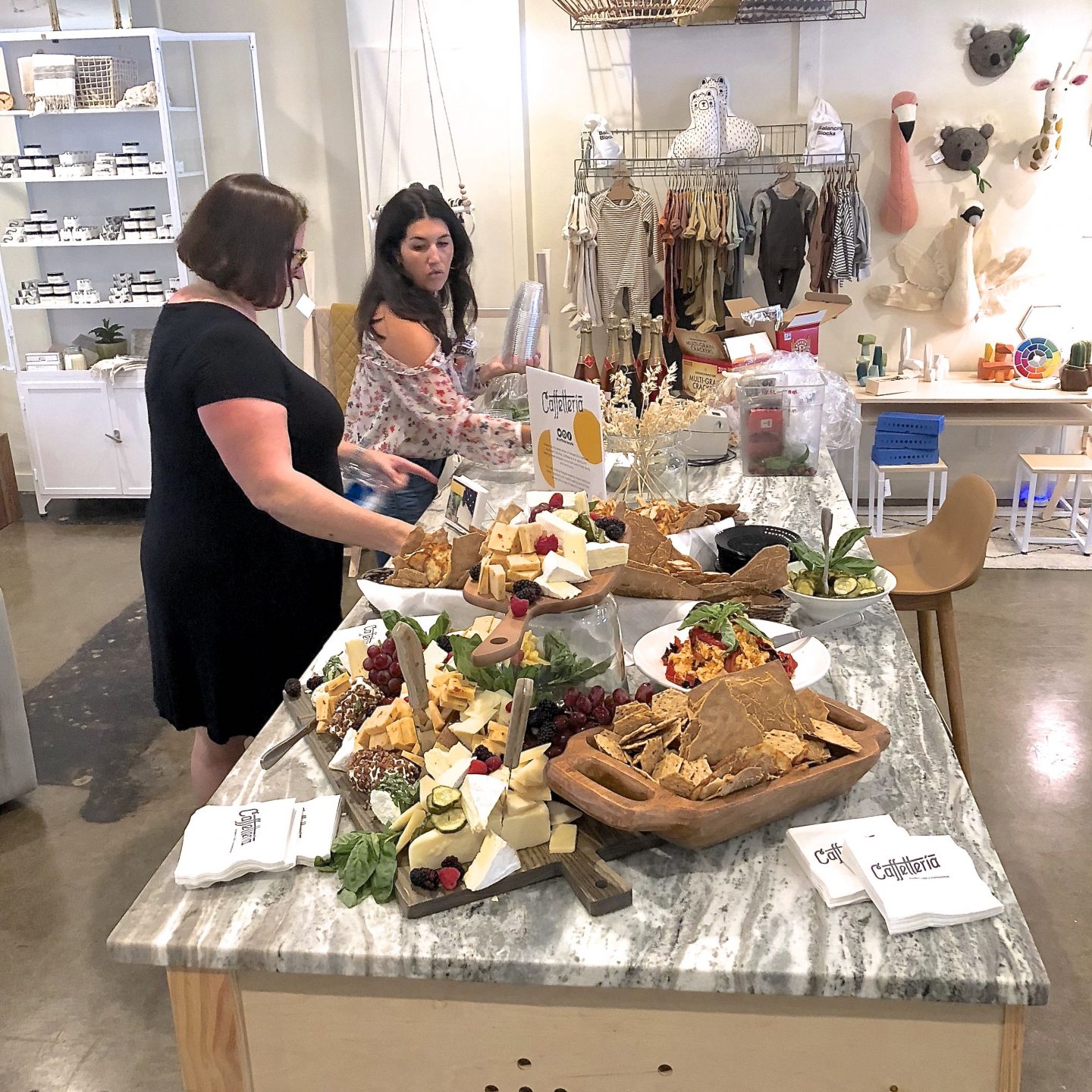 The event began with a VIP meet and greet with Bobby.  Guests received gift bags, noshed on appetizers by Caffetteria and sipped cocktails by Till Vodka and Gregory & Vine while perusing the goods at Golden & Pine.  Guests also had the opportunity to create a DIY project with sponsor 3Square Contracting. 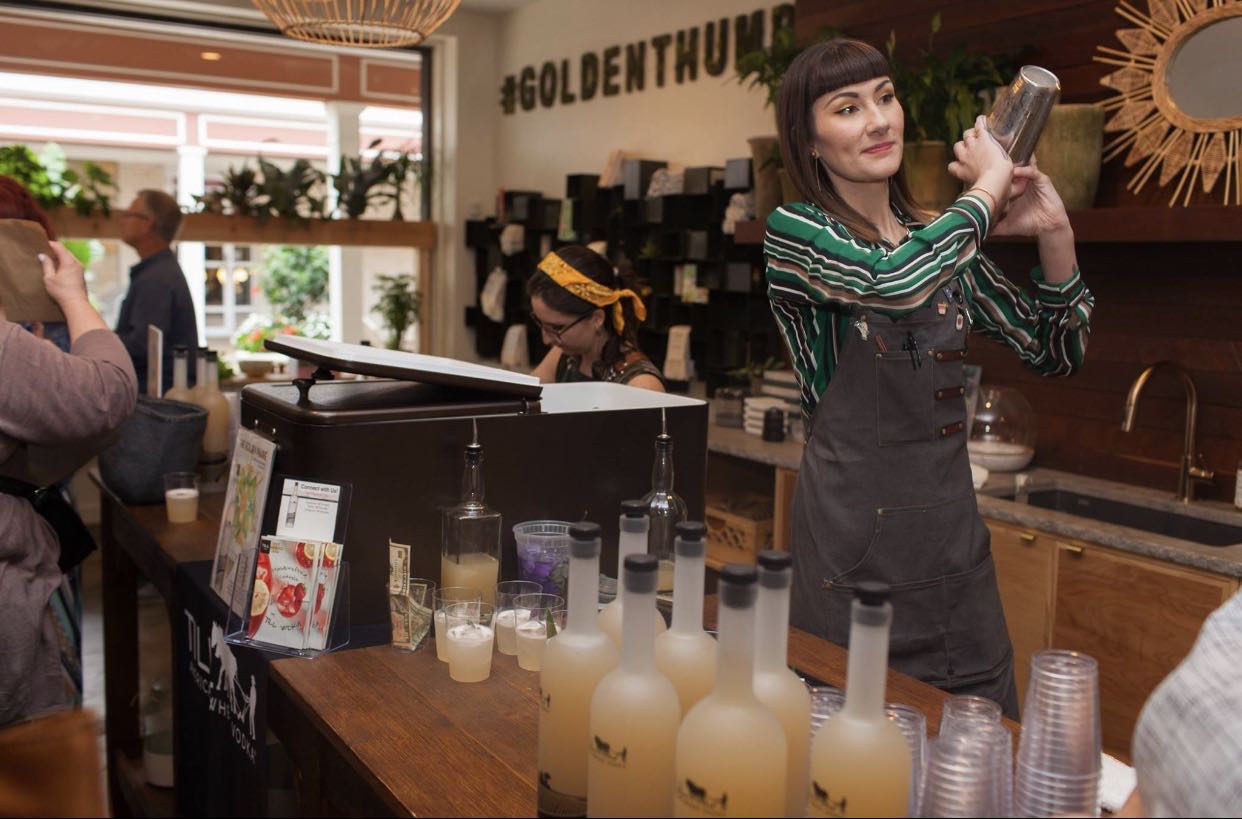 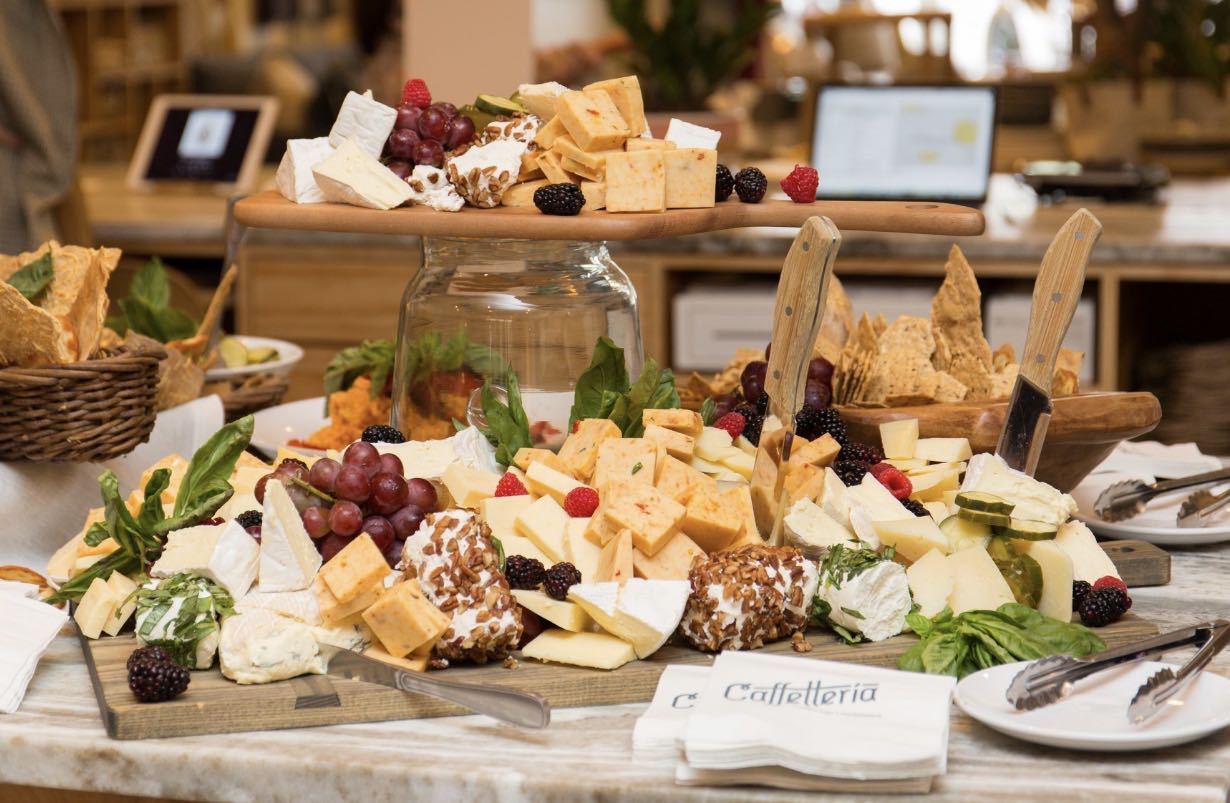 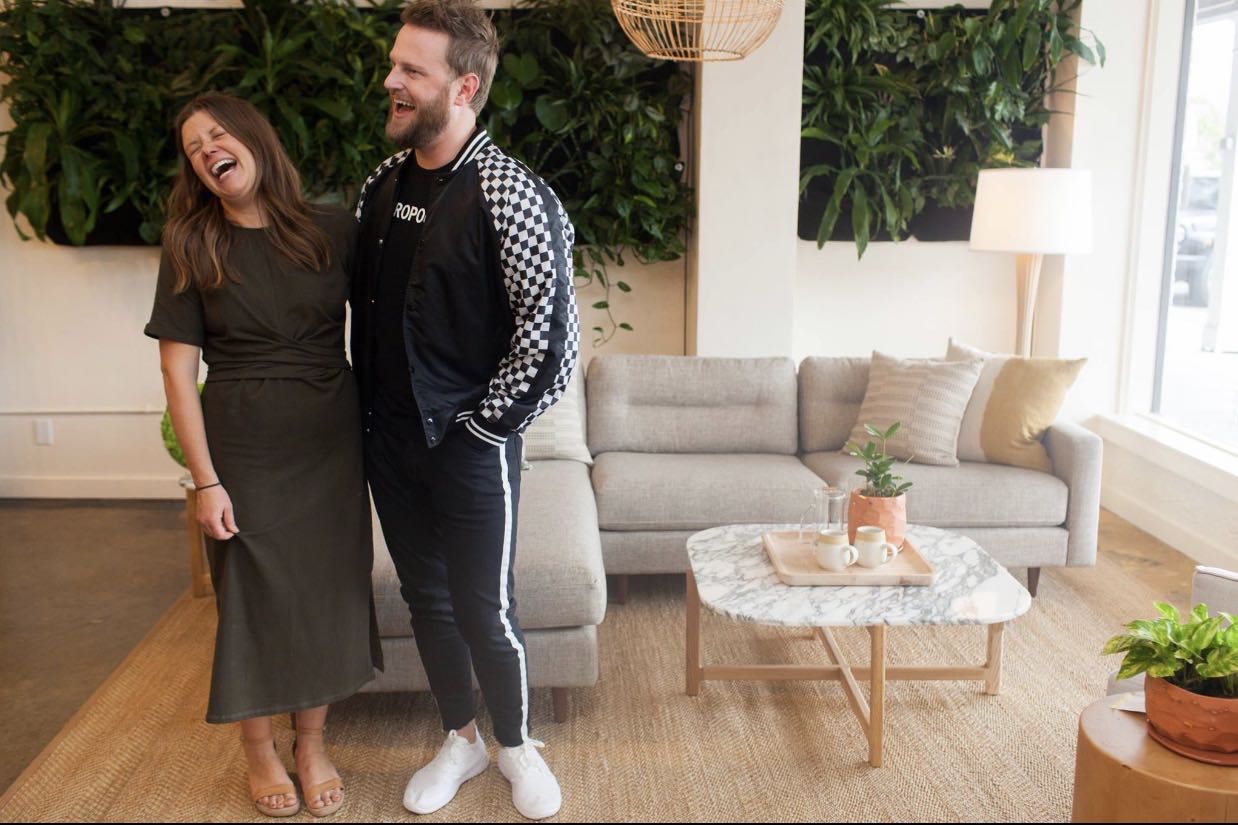 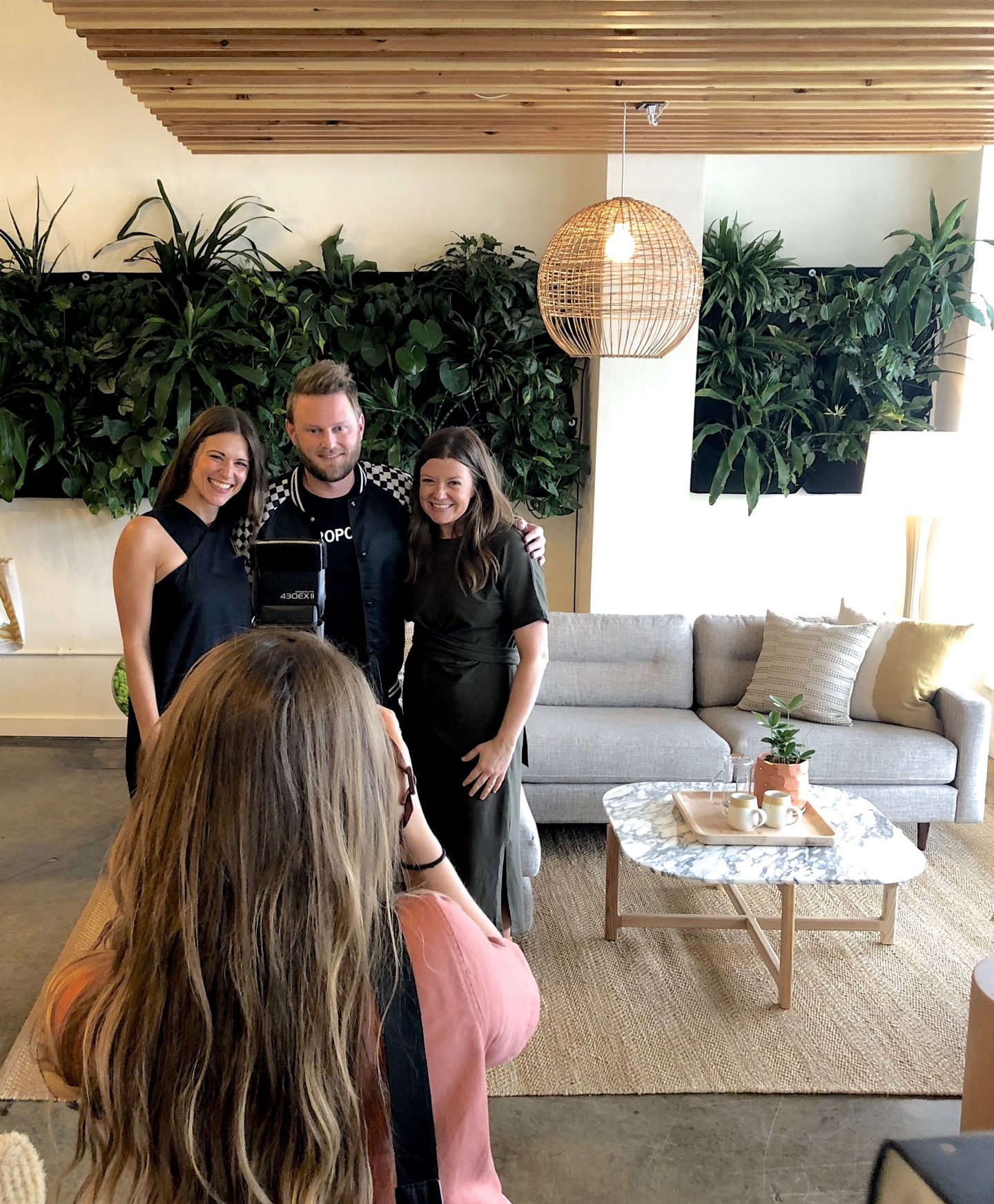 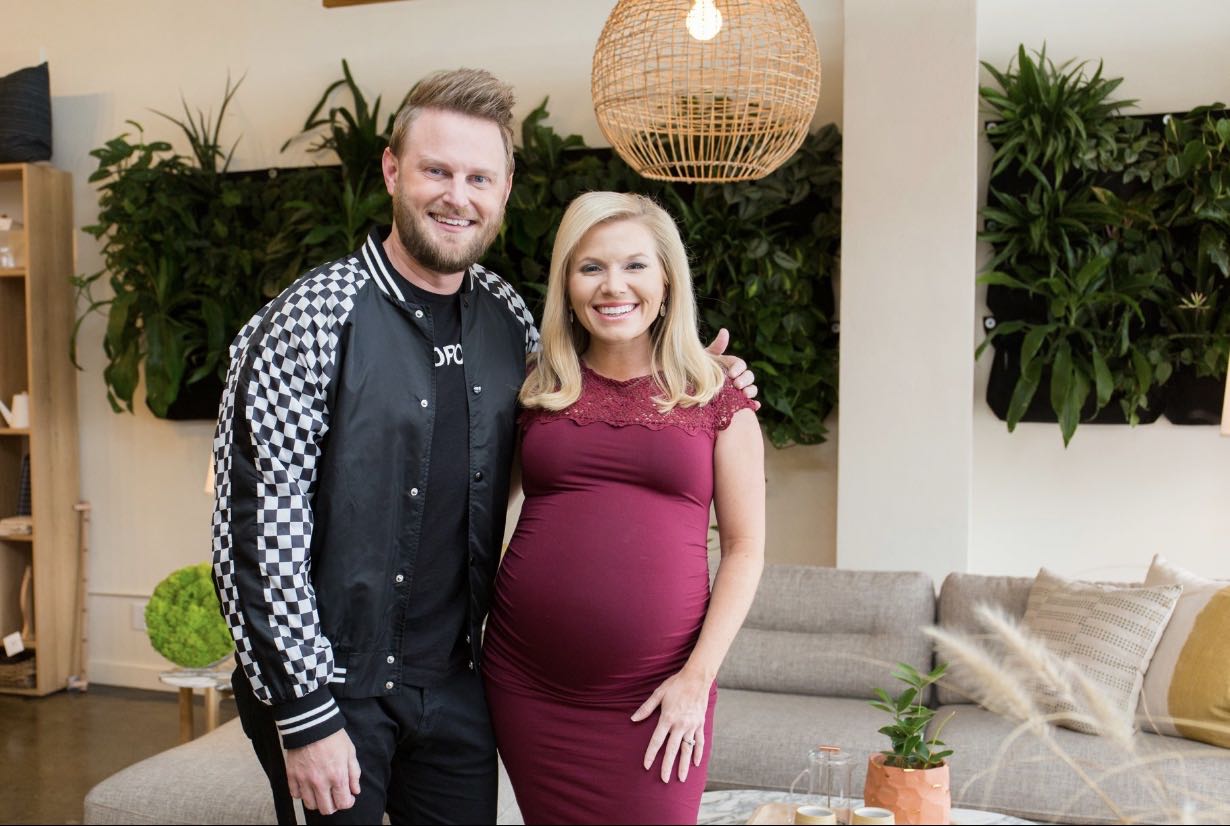 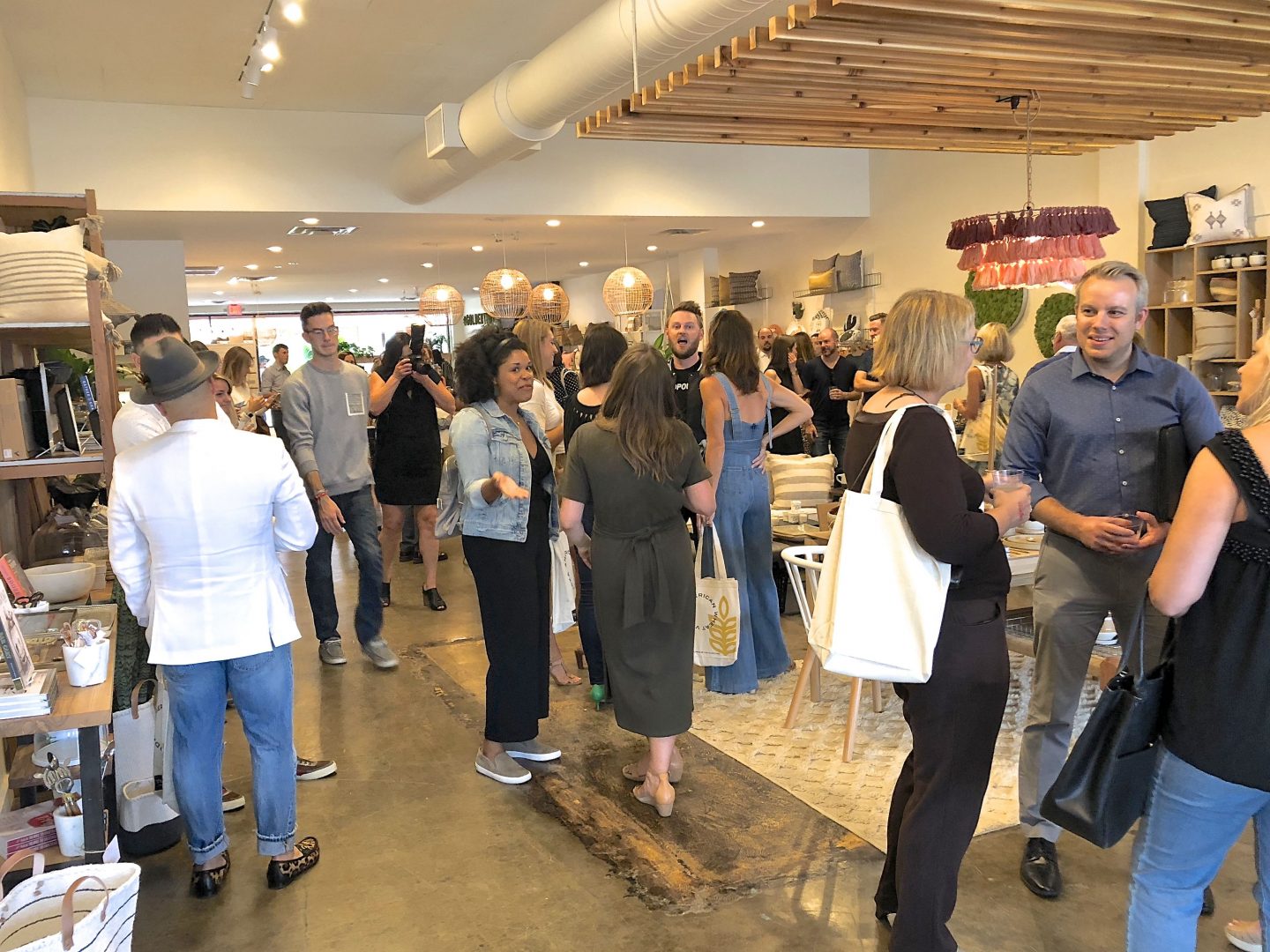 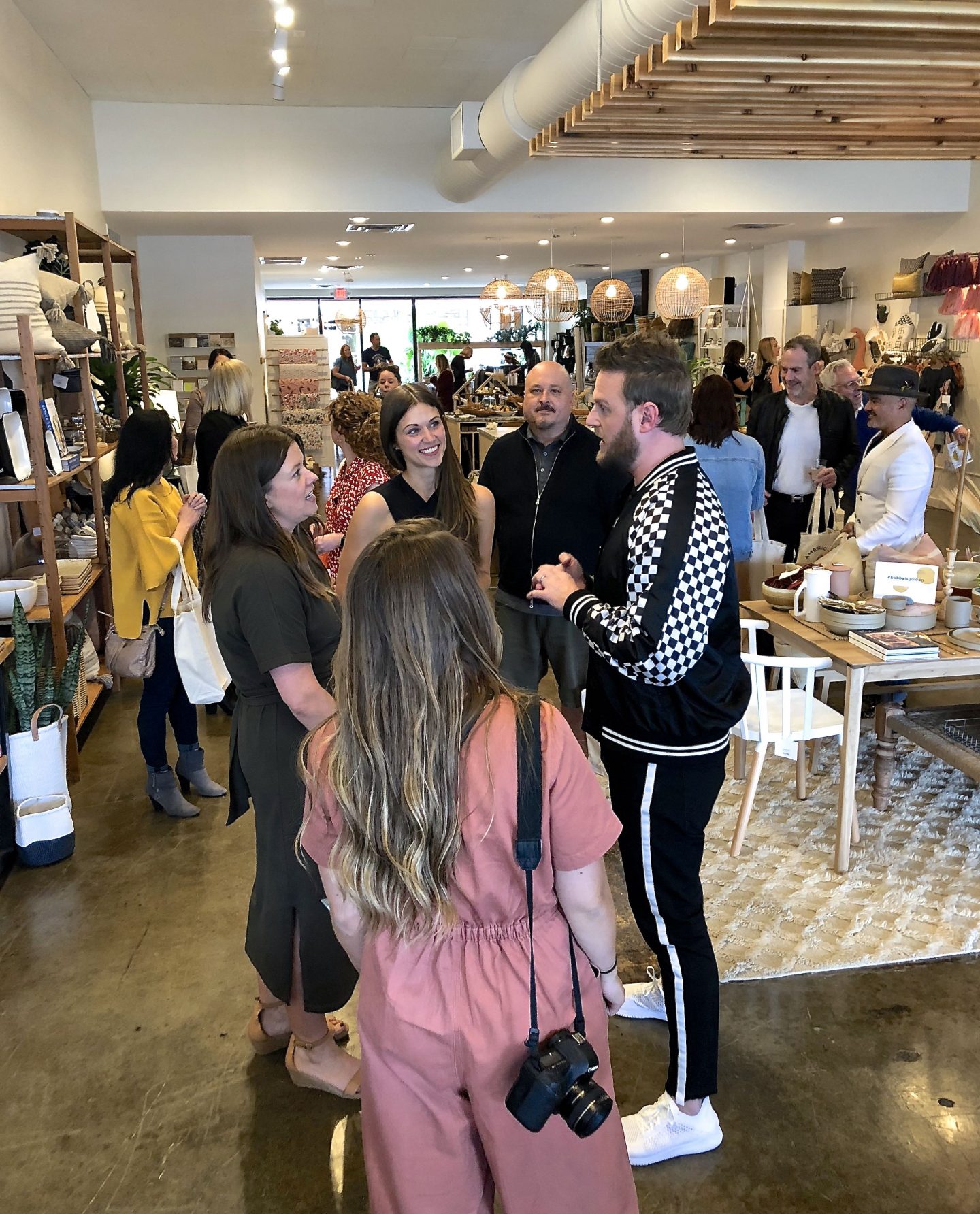 Following the VIP meet and greet the doors opened for the official start of the event.  Eager guests began queuing up early as the line stretched down the block. 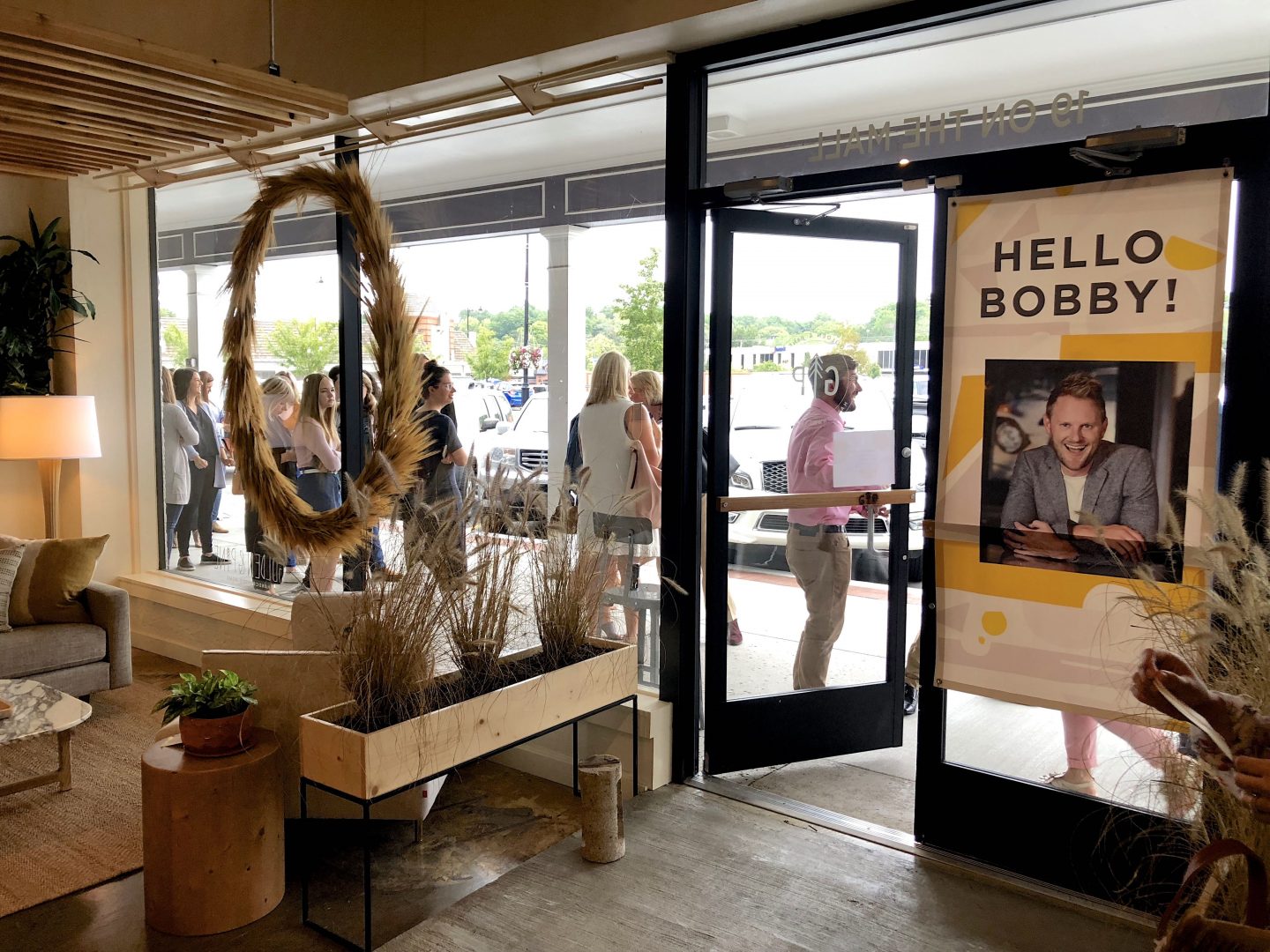 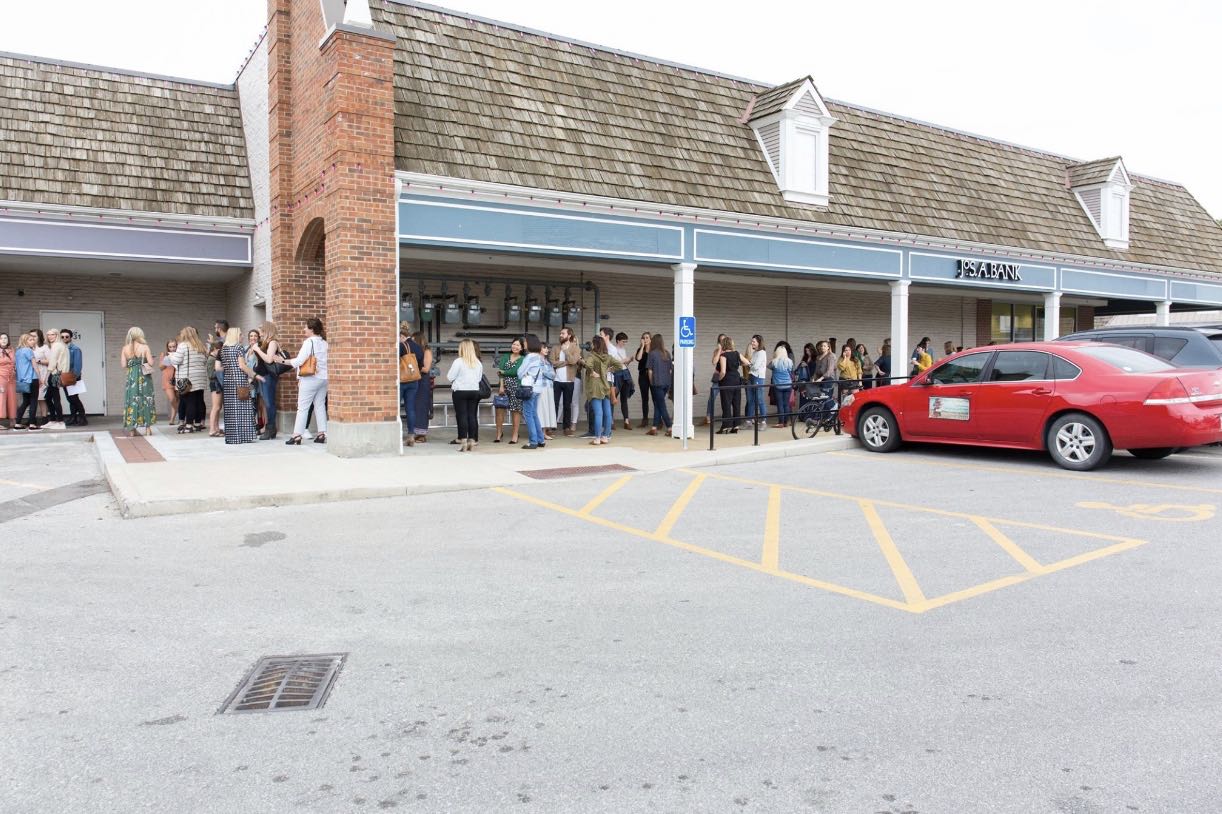 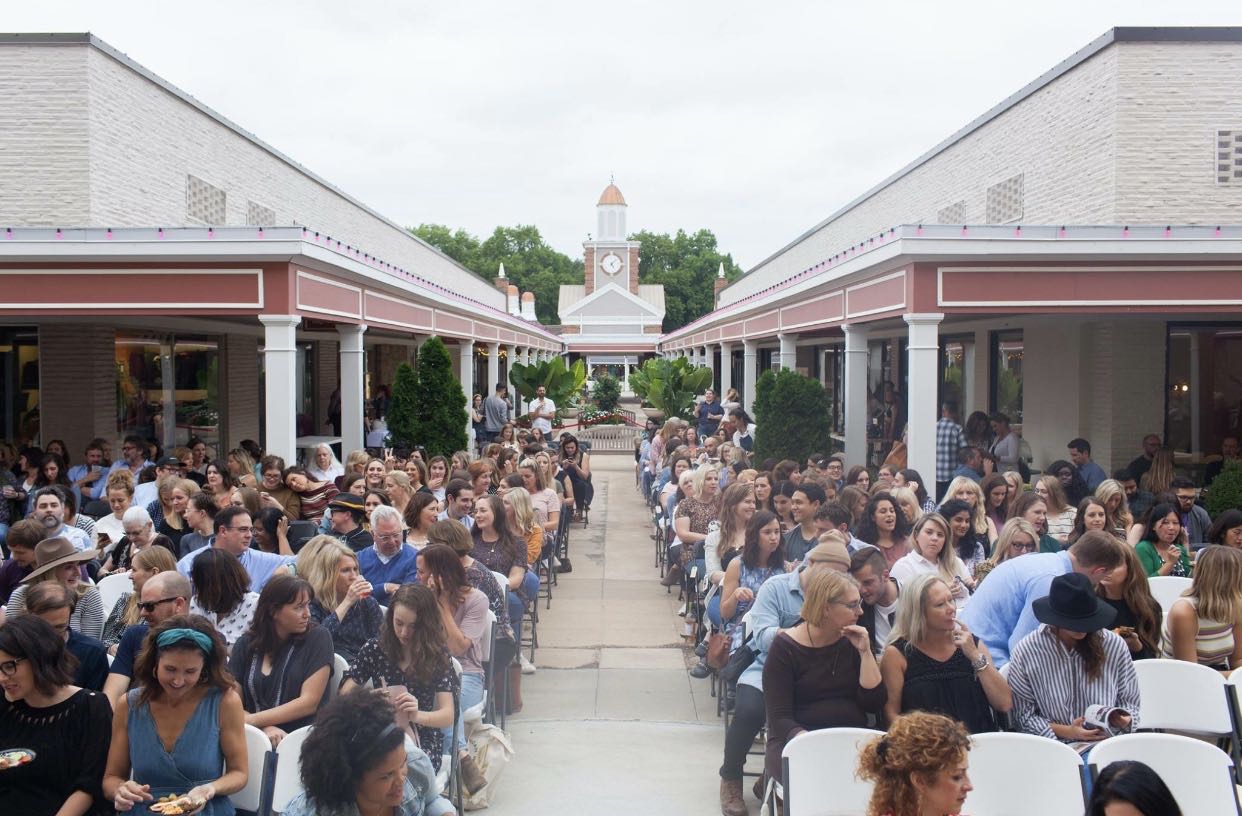 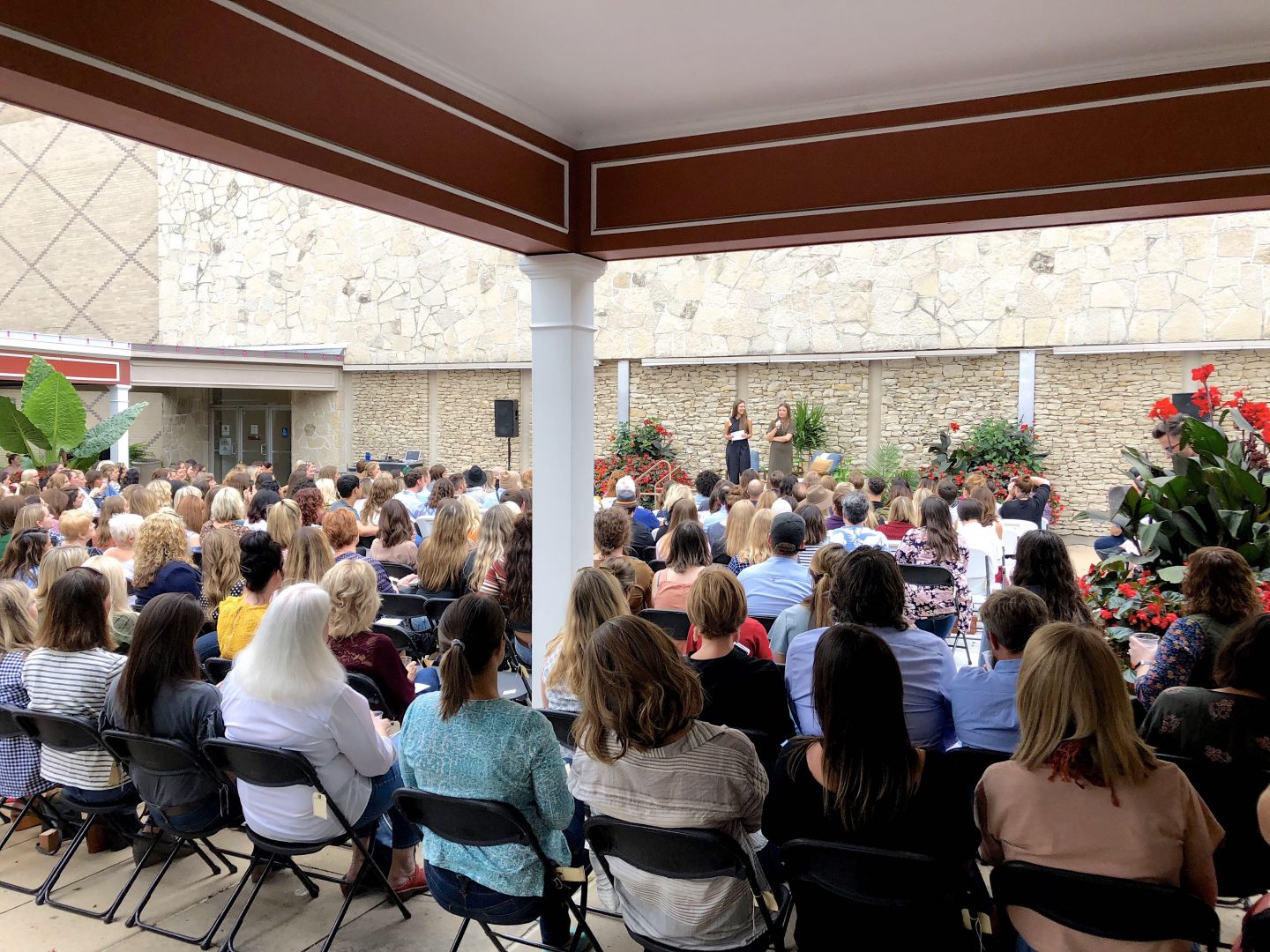 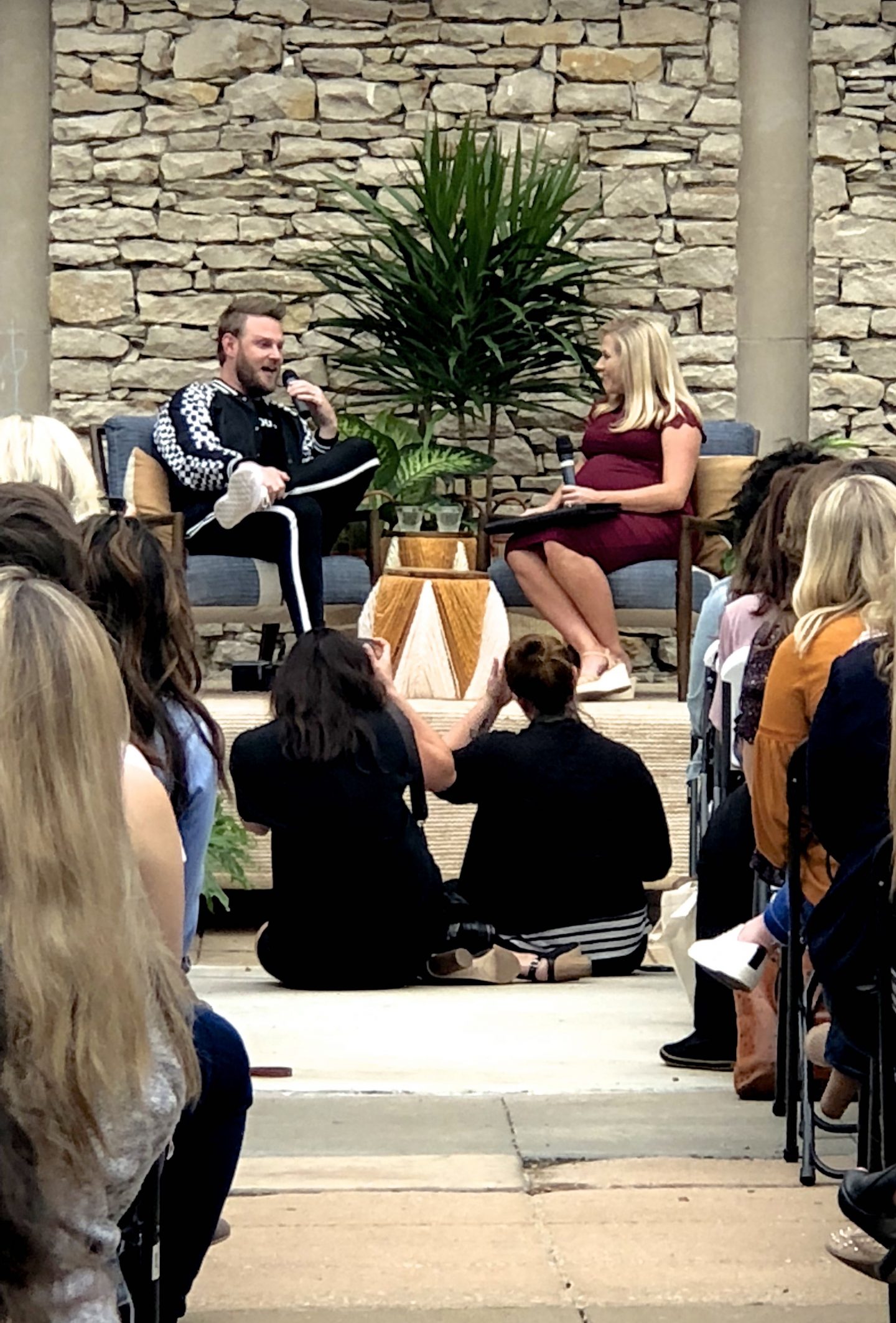 Bobby took guests through the casting process for Queer Eye admitting that none of the five thought they would make it on to the show.  To illustrate his point he quipped that cast mate, Tan France, had admitted that he only tried out for the show to gain more gay friends.  He joked that the whole process was, “like a gay Hunger Games.”

In speaking on the differences in filming in Kansas City versus their previous seasons in Atlanta, Bobby spoke of how no one knew who they were in Atlanta since the show had not yet aired.  Therefore, the cast could still go out to eat, shop, etc. anonymously.  He said that, while that element has changed, Kansas City and its residents have been very gracious and respectful since they have arrived.

Bobby spoke of Mayor Sly James campaign to get the show to Kansas City by sending a video in which he was wearing one of his signature bow ties in a rainbow stripe.  “Kansas City really wanted us here,” Bobby said.  He told a story of how a city bus was needed for an episode and the city response was basically, “whatever you need we will make it happen,” he said, “they even provided us with a bus driver.  In Atlanta, with all the movie filming that they are used to there, we would have had to pay for that.” 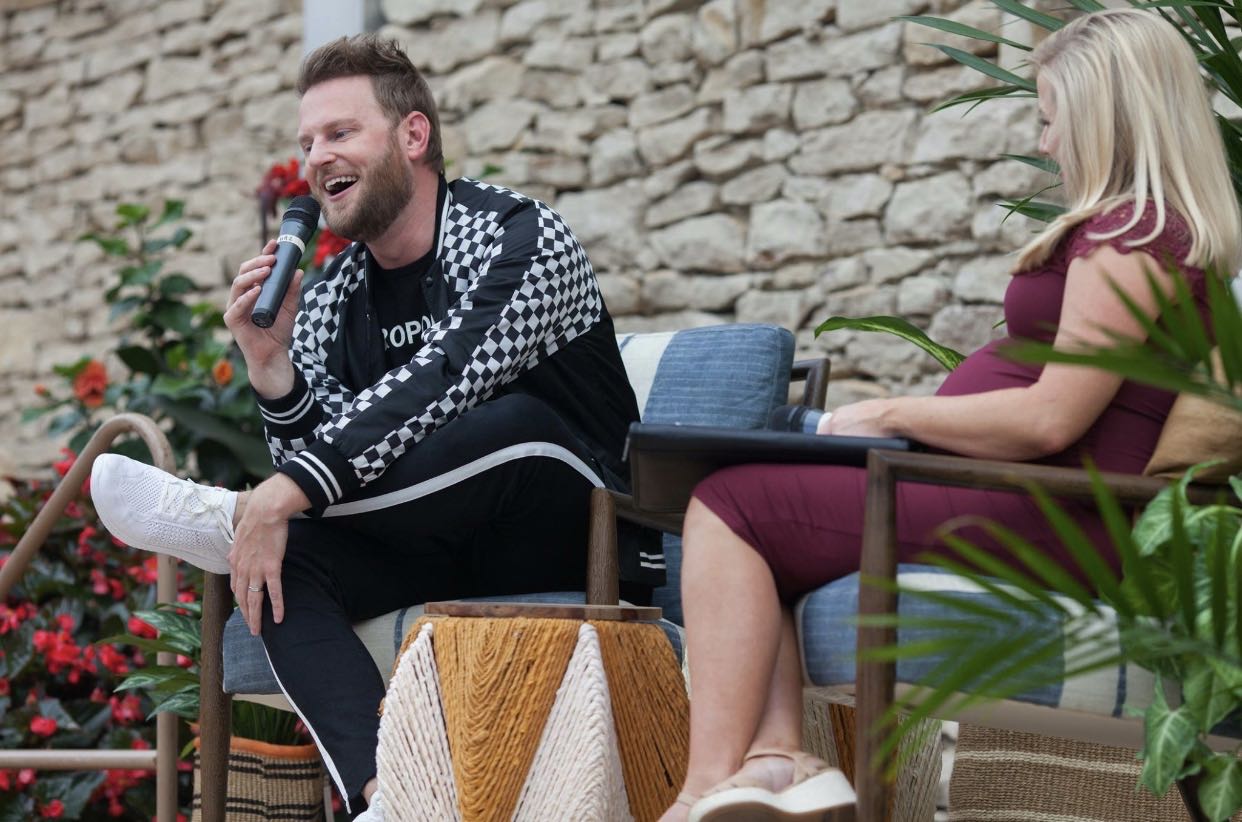 Bobby grew up in Mount Vernon, Missouri but left by the age of 17.  Having faced prejudice and bullying he, “couldn’t leave soon enough,” he said.  In his return to Missouri he said that it has become a much more welcoming place and that he was, “unexpectedly very impressed with Kansas City.”  “We were in L.A. a couple of weeks ago,” he said, “and Antoni and I were talking about how we missed being in Kansas City.  We really like it here,” he said.  He also stated that Novel has been his favorite restaurant to dine but he does eat a lot of Chipotle.  “It’s right by our apartment building,” he laughing stated, “and they give us gift cards for free burritos.”

When asked what inspired him to become a designer Bobby said, “I had never really thought of interior design as a career.”  His first real attention to design came from seeing Michael Graves designs at Target.  “That was the first time I thought about functional items having a design aesthetic,” he said.

In approaching a design project for Queer Eye Bobby did admit that he does see the space before filming begins for the show.  “I do see pictures of the space and get measurements, but I don’t get into the design until I meet the people that we are working with and find out what is important to them and learn more about their personality,” he said.  On each project he works with 6 to 7 design crew members and a construction crew.  And unlike other “reality” shows, the people on the show do get to keep all of the things (i.e. furniture, decor, etc.) that you see on the show.  “Actually, they get more items than you even see on the show,” he said, “there are things like mattresses, blenders, kitchen items and more, things to really make a good impact on their life.” 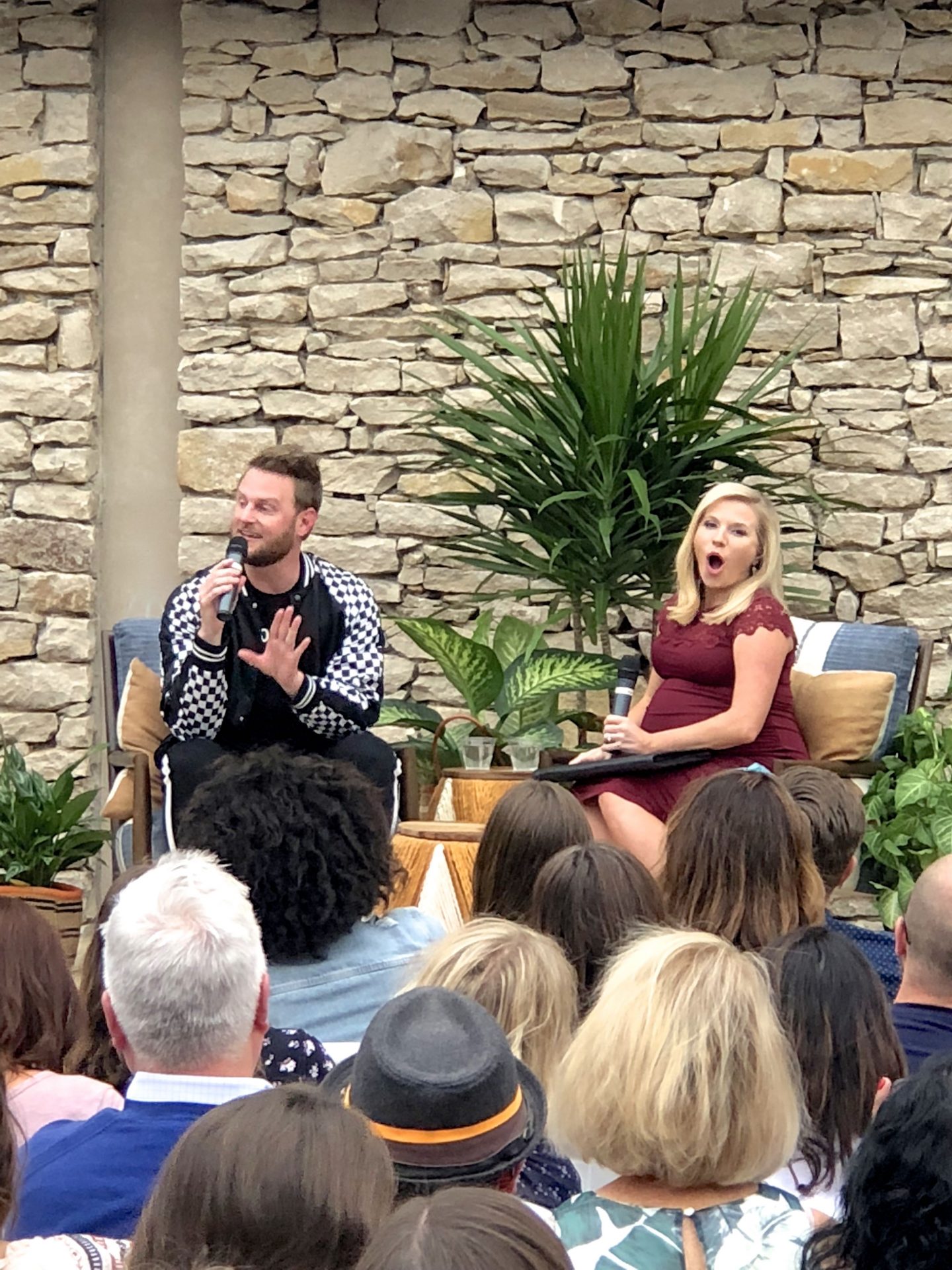 Asked what the easiest thing to do, design wise, to your space to create the biggest impact Bobby didn’t hesitate.  “Paint,” he stated, “a fresh coat of paint can change your perspective.”

In discussing trends in design he said that he is seeing a movement towards being, “less selfish, taking into account the environment and thinking about the people who make the products.”  He spoke of a line carried by Golden & Pine, Armadillo & Co., a socially responsible company creating handmade rugs.  “Their products are beautifully designed,” he said, “but they are committed to helping communities.”

He also stated that, “there are no trends that I’m hating right now.” He said that he is seeing more neutral and calming color palettes which he loves.  “I’m not personally a big fan of color in my own designs,” he said, “so I like the neutrals that we are seeing in spaces and in places such as Golden & Pine.”

In parting comments on how to succeed today in design he recommended to, “learn as much computer skill as you can.”  “Learn CAD, become an expert at technology in your field because that will make you valuable and set you apart,” he said. 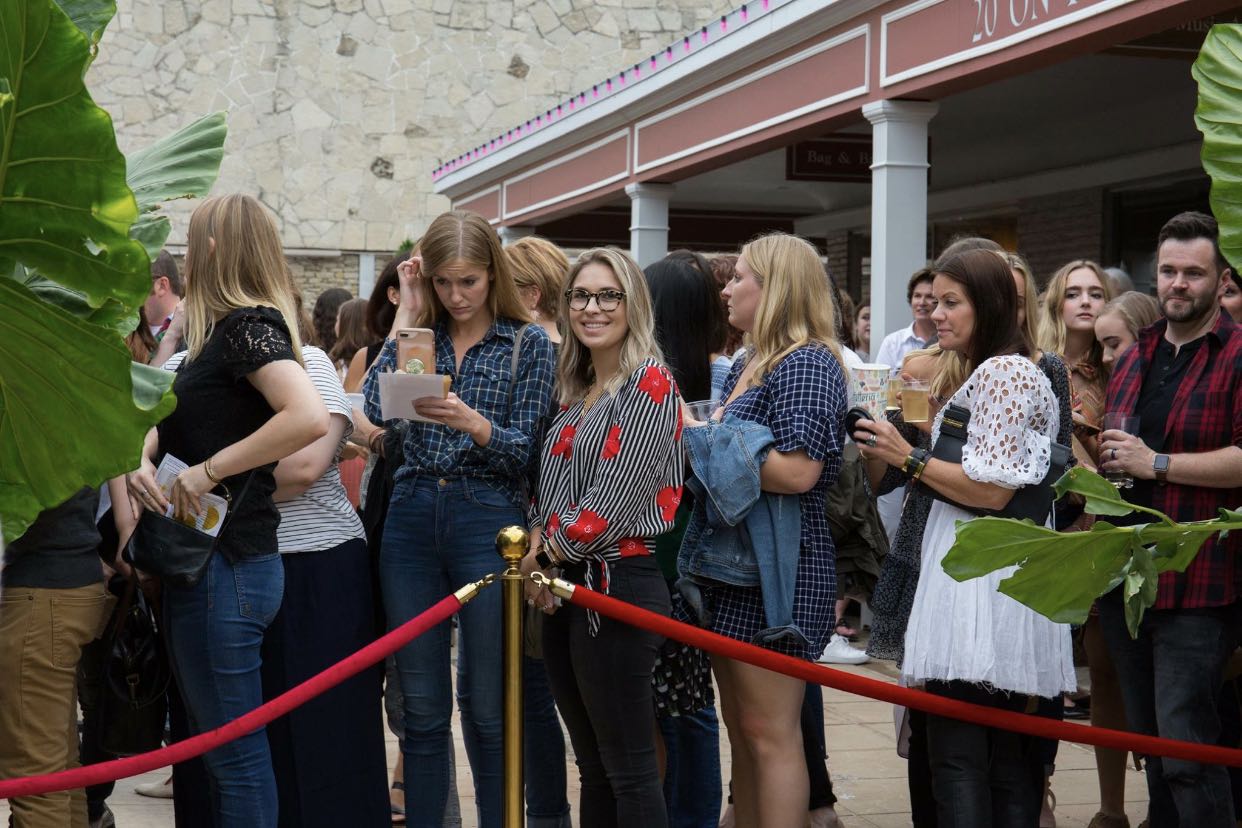 Following Bobby’s speaking portion of the night’s event, guests lined up to snag a photo op with the man himself in the “photo booth.” 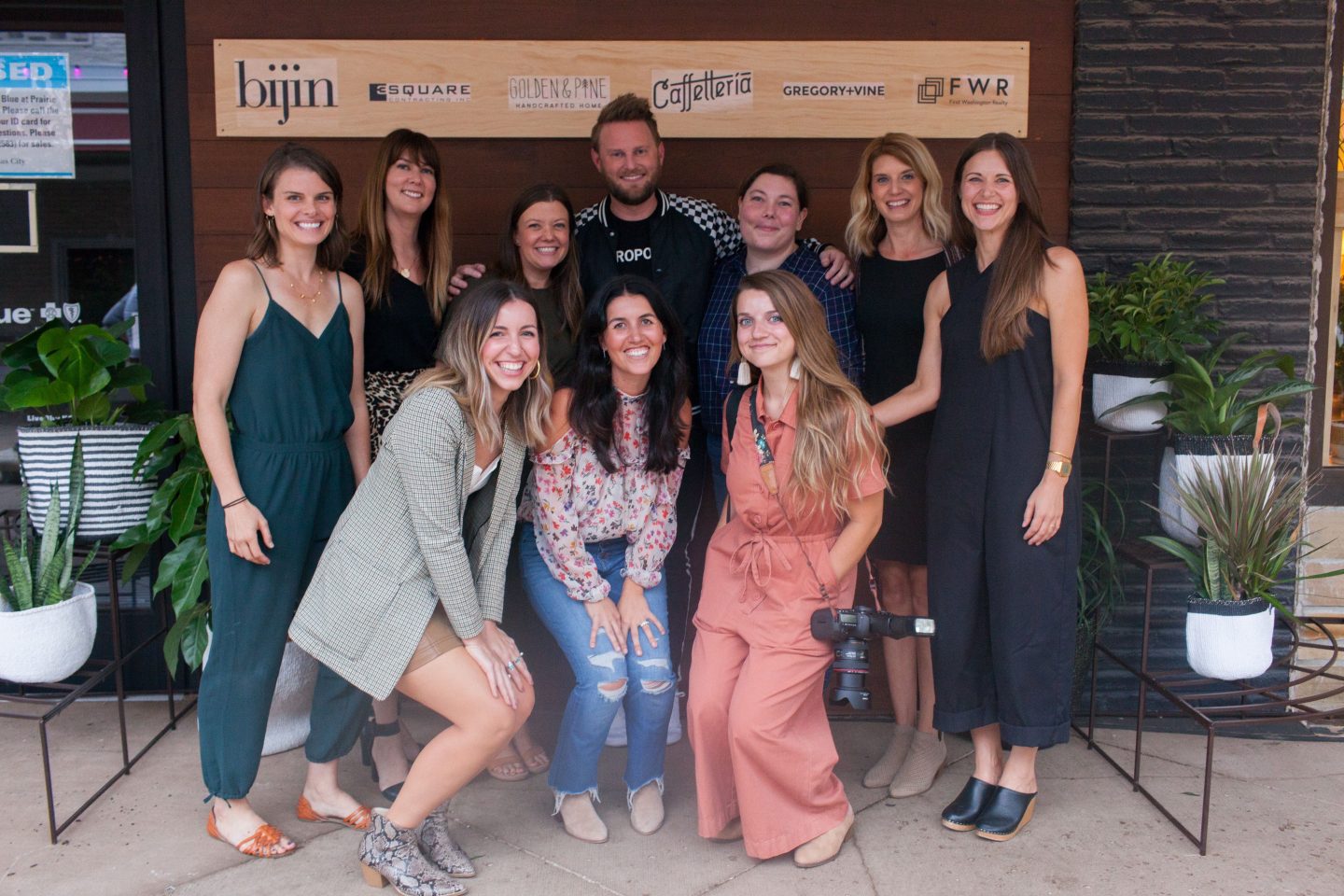 Parting sweets of mini pumpkin spice cupcakes by Dolce Bakery and a copy of the latest Kansas City Spaces magazine were distributed to guests as they left for the night.

A big thank you to Bobby Berk and co-hosts Golden & Pine and Caffetteria for such a fun and memorable evening.  Another special thanks is deserved to all of the sponsors and contributors of the evening: Till Vodka, Gregory and Vine, 3Square Contracting, Euston Hardware, Kansas City Spaces Magazine, Ampersand Design Studio, Bijin Salon and Spa, First Washington Realty, Dolce Bakery, and Mr. Davis Clothing.  And to all the team members behind the scenes for pulling it all together.  I was happy to be one of that crew!

One last parting shot, because I’m a nerd. 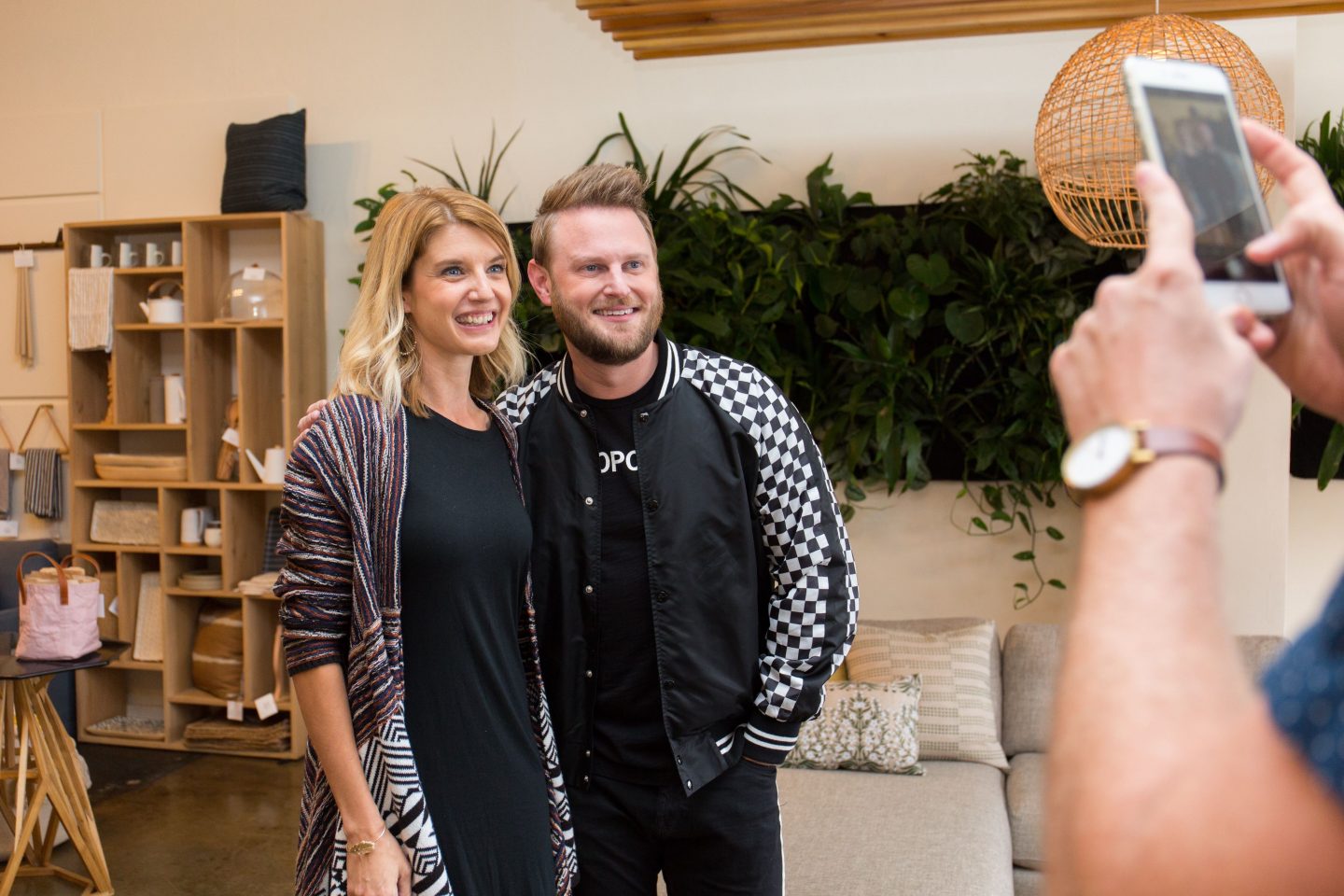 Me with Bobby Berk.  And a fantastic example of why you always go with a pro in pics.  Thanks to Jessica Cain for making me look way better than my iPhone did! (Im pretty sure my iPhone camera hates me!) 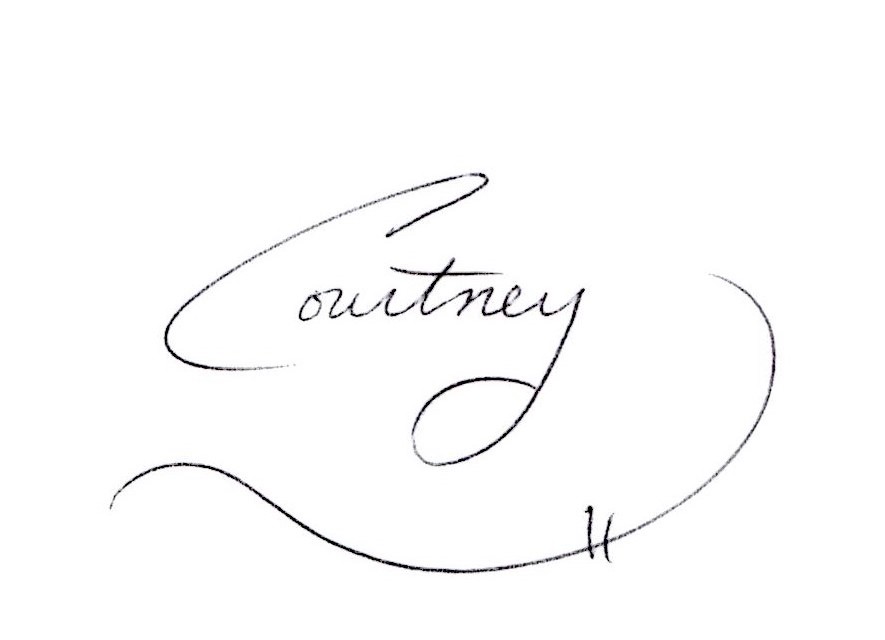