My husband and I called Dallas home for many years before settling in Kansas City.  It was while living there that we bought our first home together, got married, and had our first child.  Suffice it to say we have many cherished memories and dear friends based in this shiny, booming, trendy and sprawling city.

We returned for a quick visit to our old stomping grounds over the holidays to visit a few favorite spots, a Cowboys game for the hubs and dinner at Fireside Pies and a visit to Highland Park Village for the kids and I.  We also got to visit with some very good friends who graciously let me share their beautiful home with you! 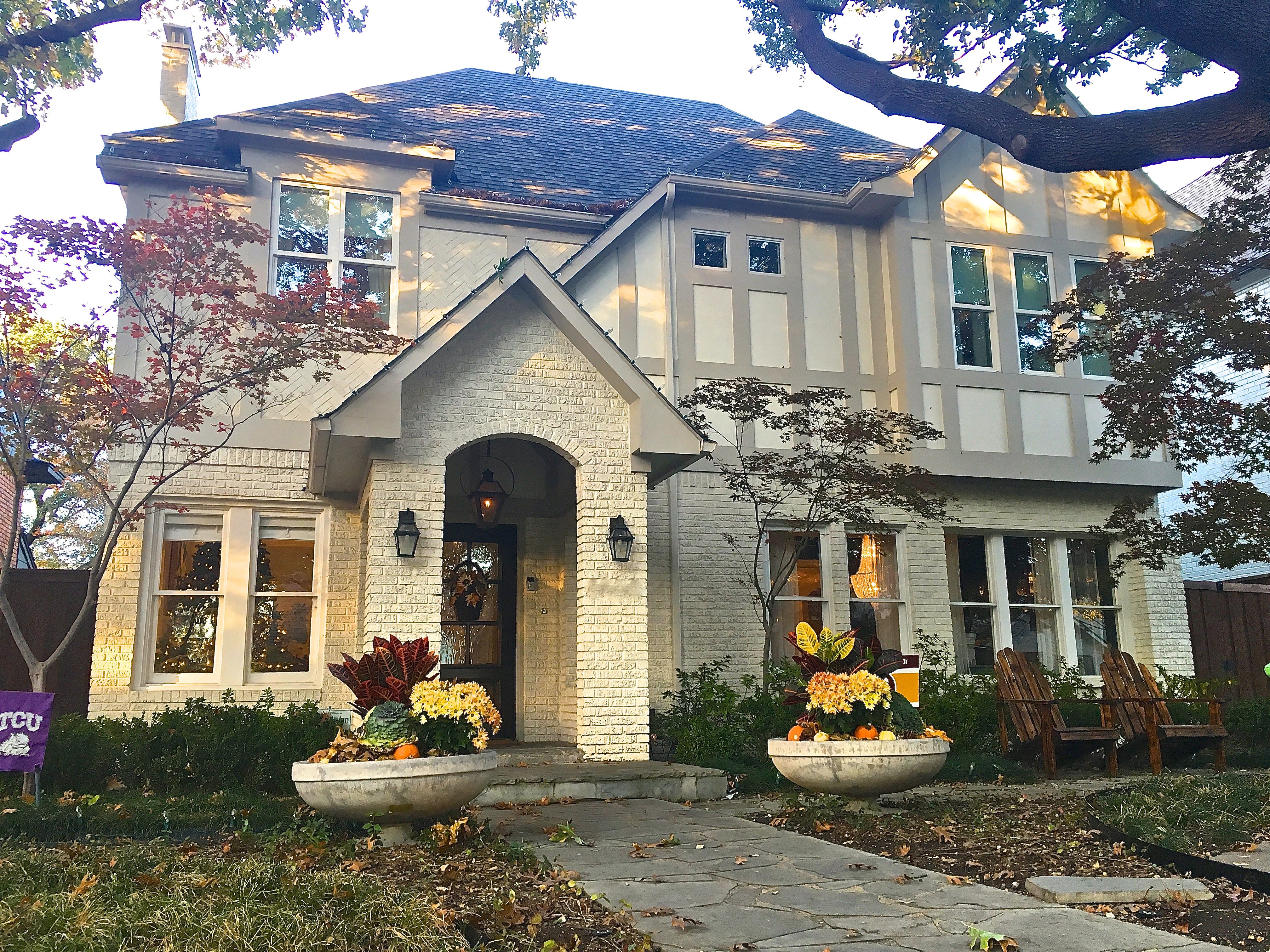 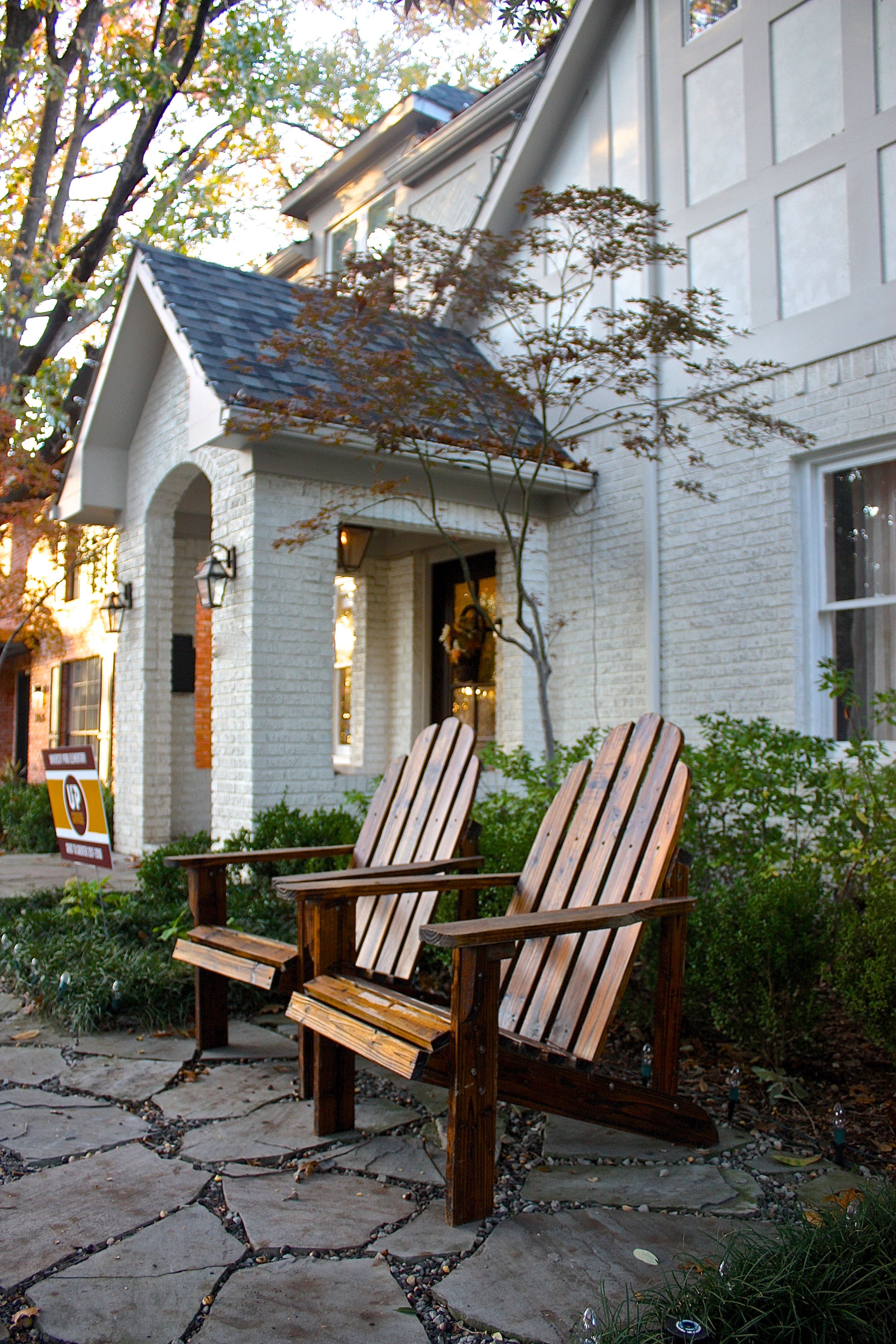 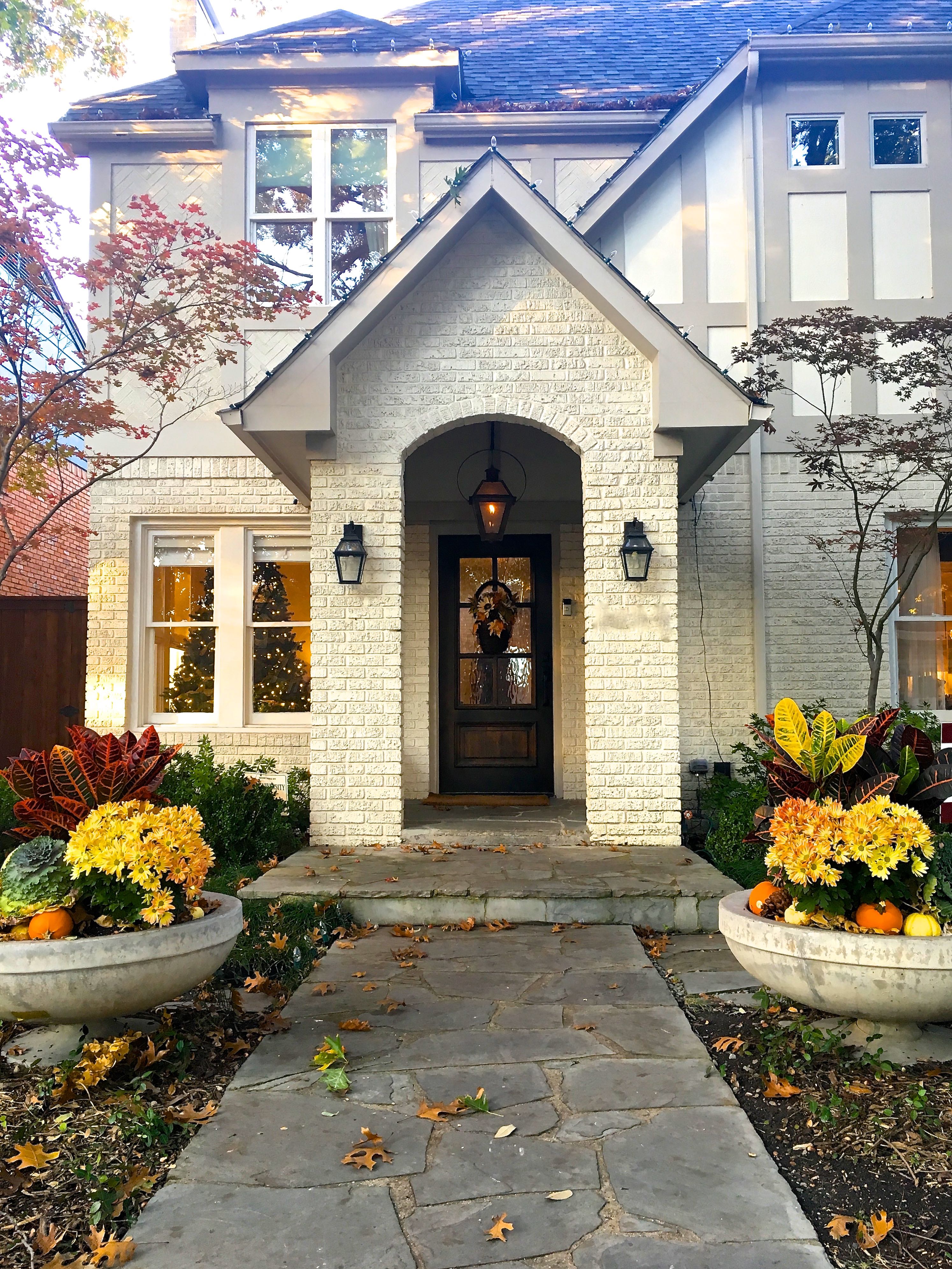 The 1924 Tudor home is situated in the picturesque neighborhood of University Park.  Purchased seven years ago, the family (who had very small children when they moved in), soon realized that they were quickly outgrowing the space.  Not wanting to move from a neighborhood and home that they loved, they decided to take on the daunting task of a massive remodel.  The nine month long construction project, completed four years ago, turned the 3 bedroom/2 1/2 bath space into a 4 bedroom/4 bath home.

The Master Bedroom and bath, which had originally been located on the ground floor, was relocated to the 2nd floor along with the other 3 bedrooms.  The roof of the home was raised to create a true second story, providing more space and eliminating the awkward sloped ceilings of the original 2nd floor which had been converted from attic space.  An upstairs playroom for the children and laundry room completed the space. 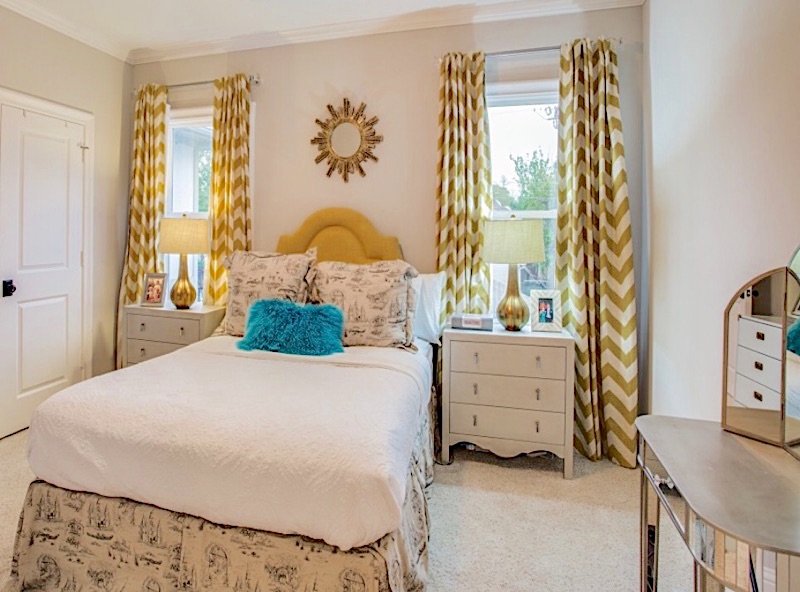 Having family that hail from Louisiana, the homeowner kept Southern style and culture in mind in decorating the guest bedroom.  New Orleans Toile from Hazelnut New Orleans is incorporated into the bedding bringing in a bit of Big Easy style for their Southern guests. 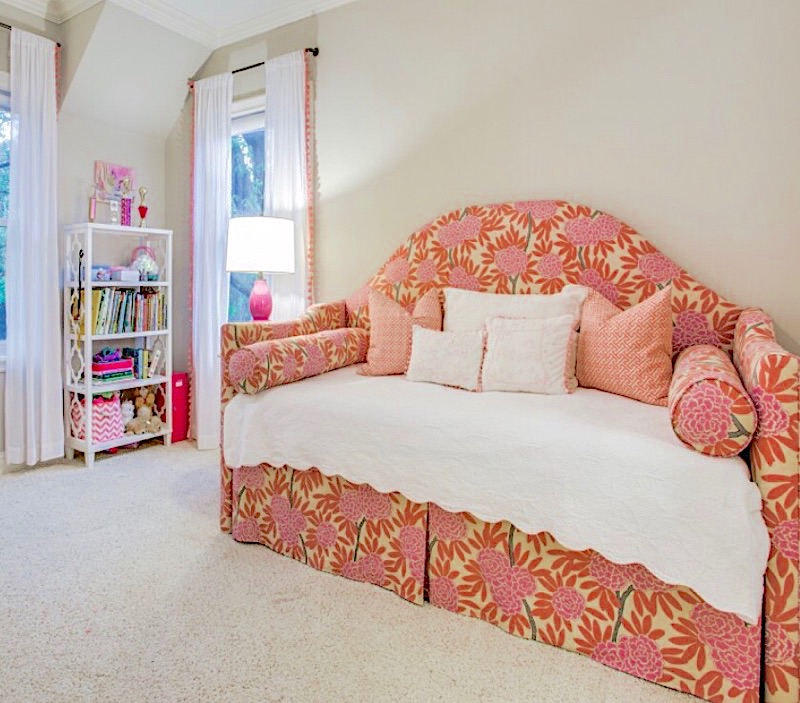 On the ground floor the floorpan was reconfigured to move and enlarge the kitchen in to the space formerly occupied by the master bedroom.  The space that had housed the kitchen became the family’s informal living room.  The homeowners wanted to open up the space in the previously segmented floorpan of the ground floor.  With a desire to be able to be in the kitchen yet still watch football on the television, see the kids playing in the backyard and just improving the overall “flow” of the home, rooms were opened up by widening existing doorways and entryways. 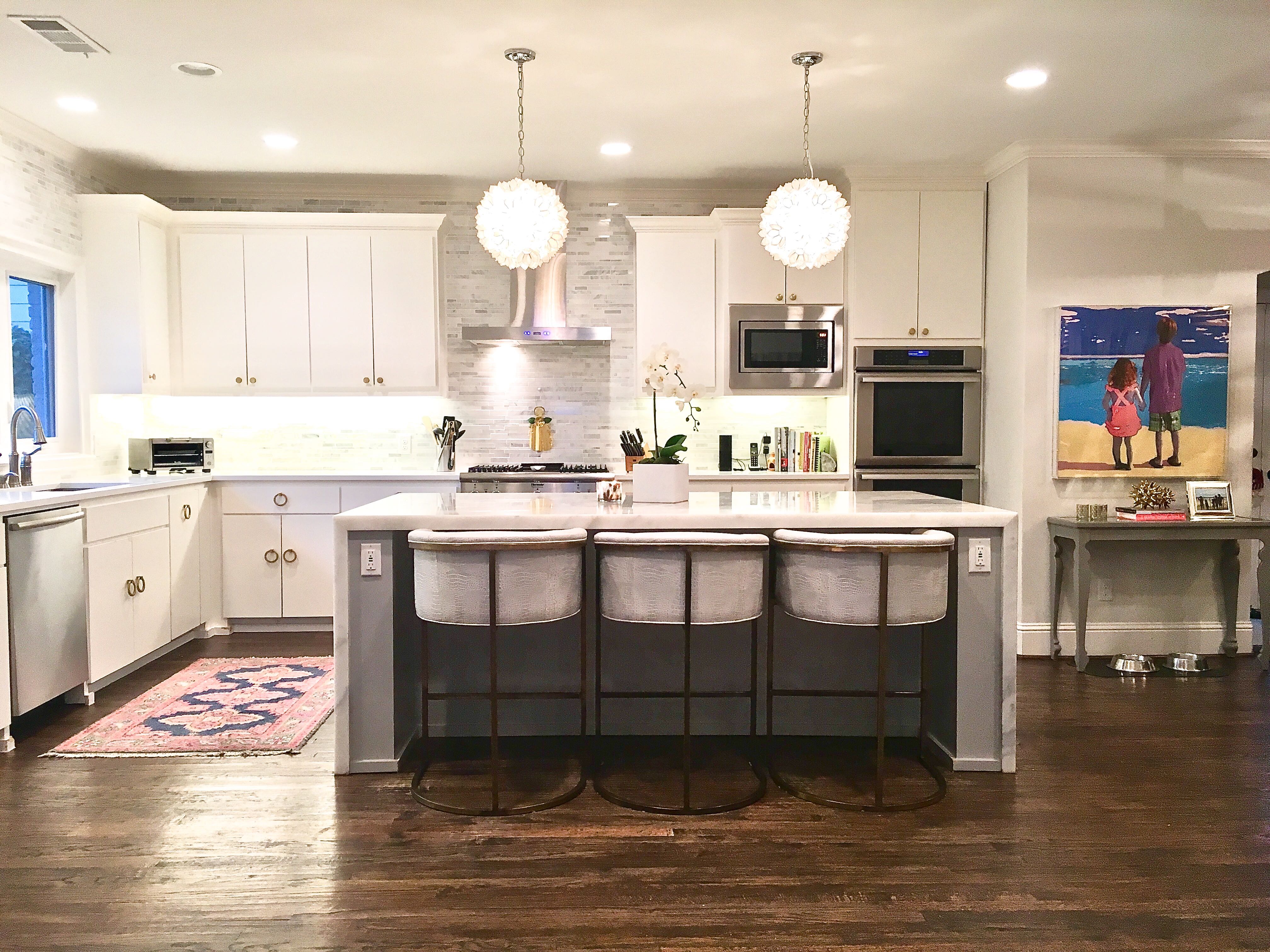 The new, bright and open kitchen is a favorite space of the homeowner.  It is the most popular and inviting gathering space in the home.  Providing a vantage point throughout the lower level of the home and out into the backyard, the kitchen is where everyone comes to hang out. 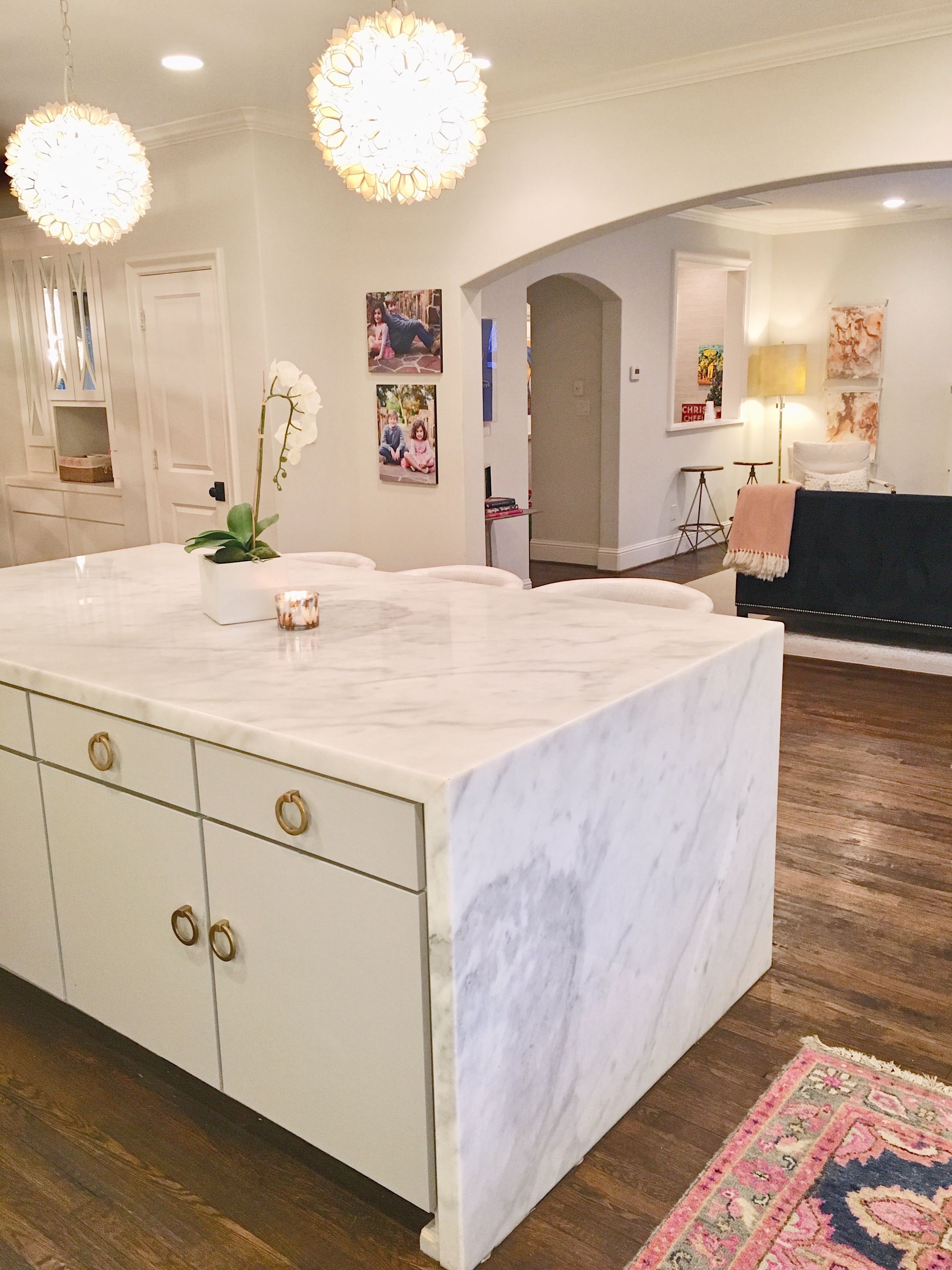 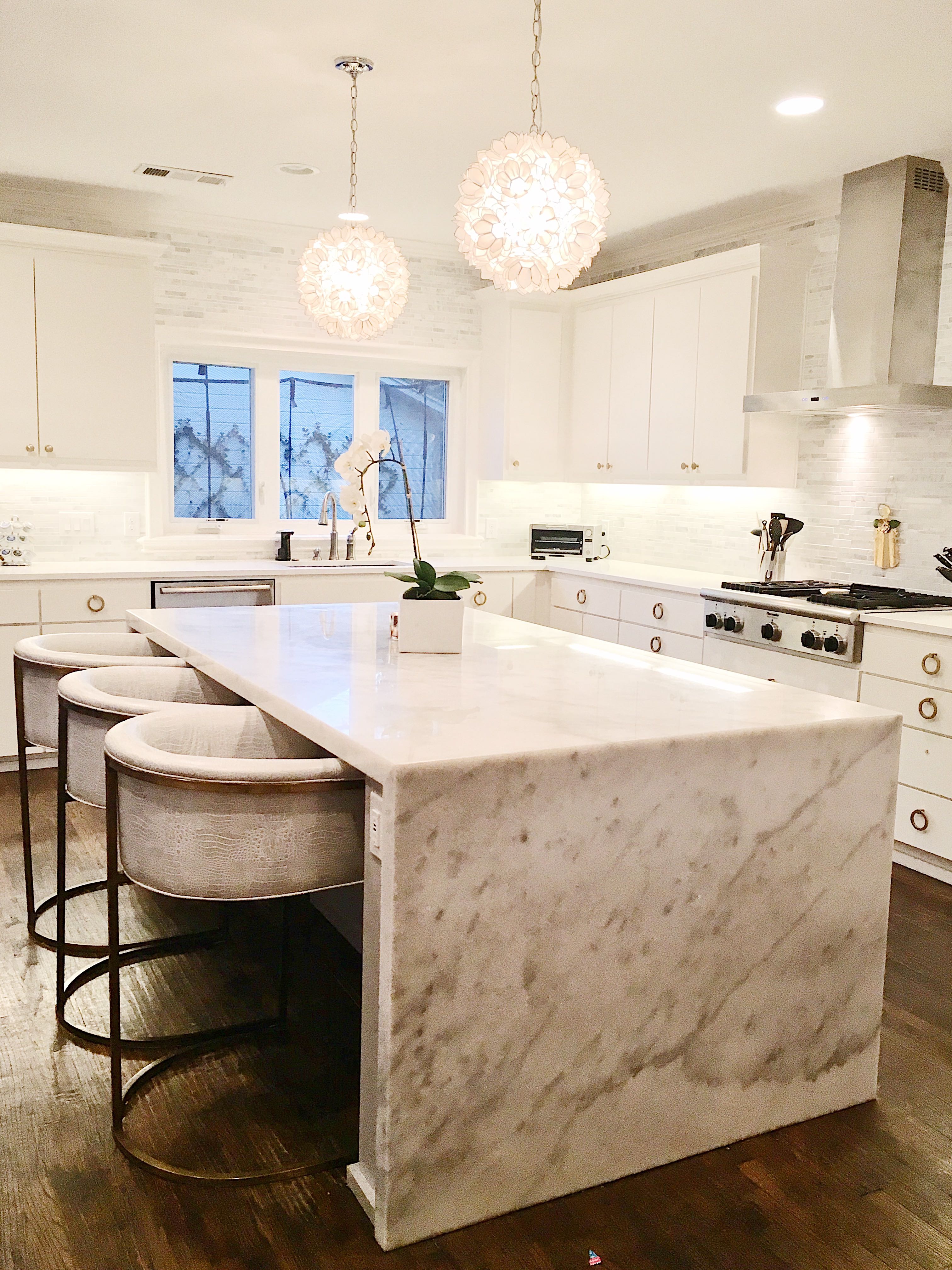 A large center island in Carrara Marble with barstools purchased from an Arteriors warehouse sale and reupholstered in an easy to clean, yet stylish faux snakeskin provides the perfect spot for anything from snack time for the kids, to sitting with a glass of wine for the adults.  Capiz shell pendant lights from Layla Grayce hang above the island. 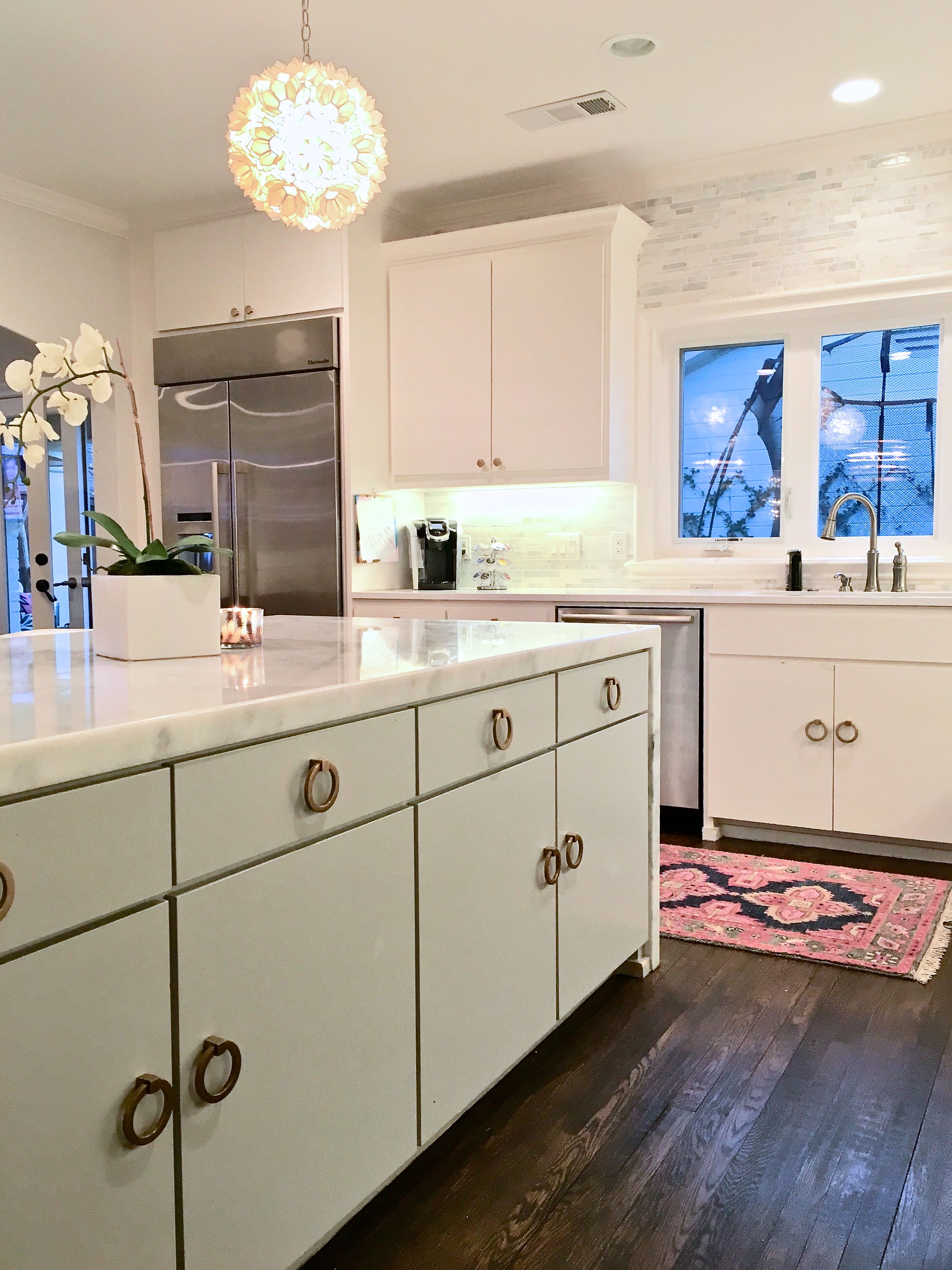 Flat front cabinetry adds a contemporary flair to the space while polished brass pulls by Copper Creek hint to the homeowner’s love of Hollywood Regency style.  The homeowner chose polished brass knowing that it would lose it’s luster over time, thus enhancing the warmth and “realness” of the material. 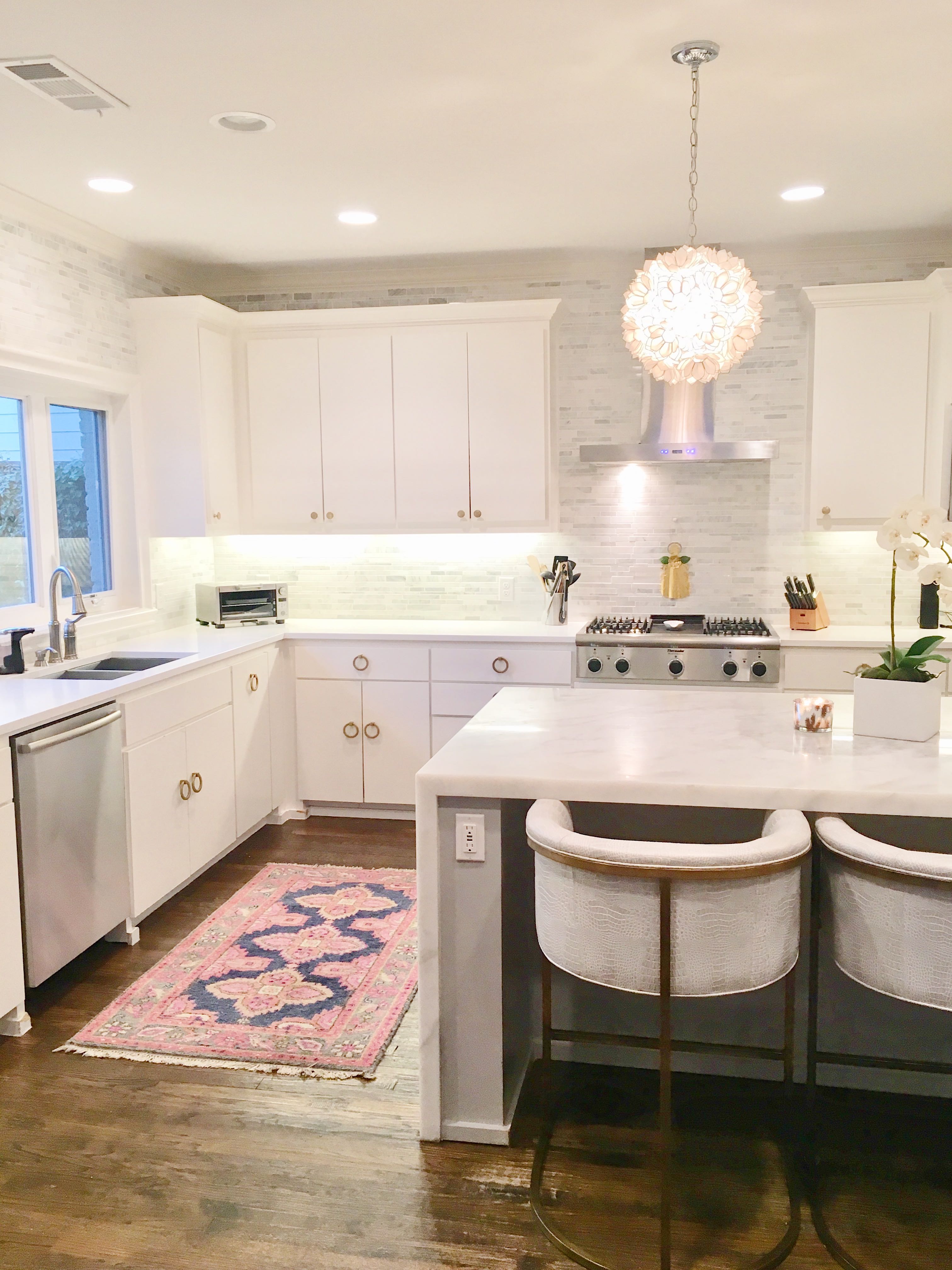 Coutertops of pure white Caesarstone is accented by a Carrara backsplash. 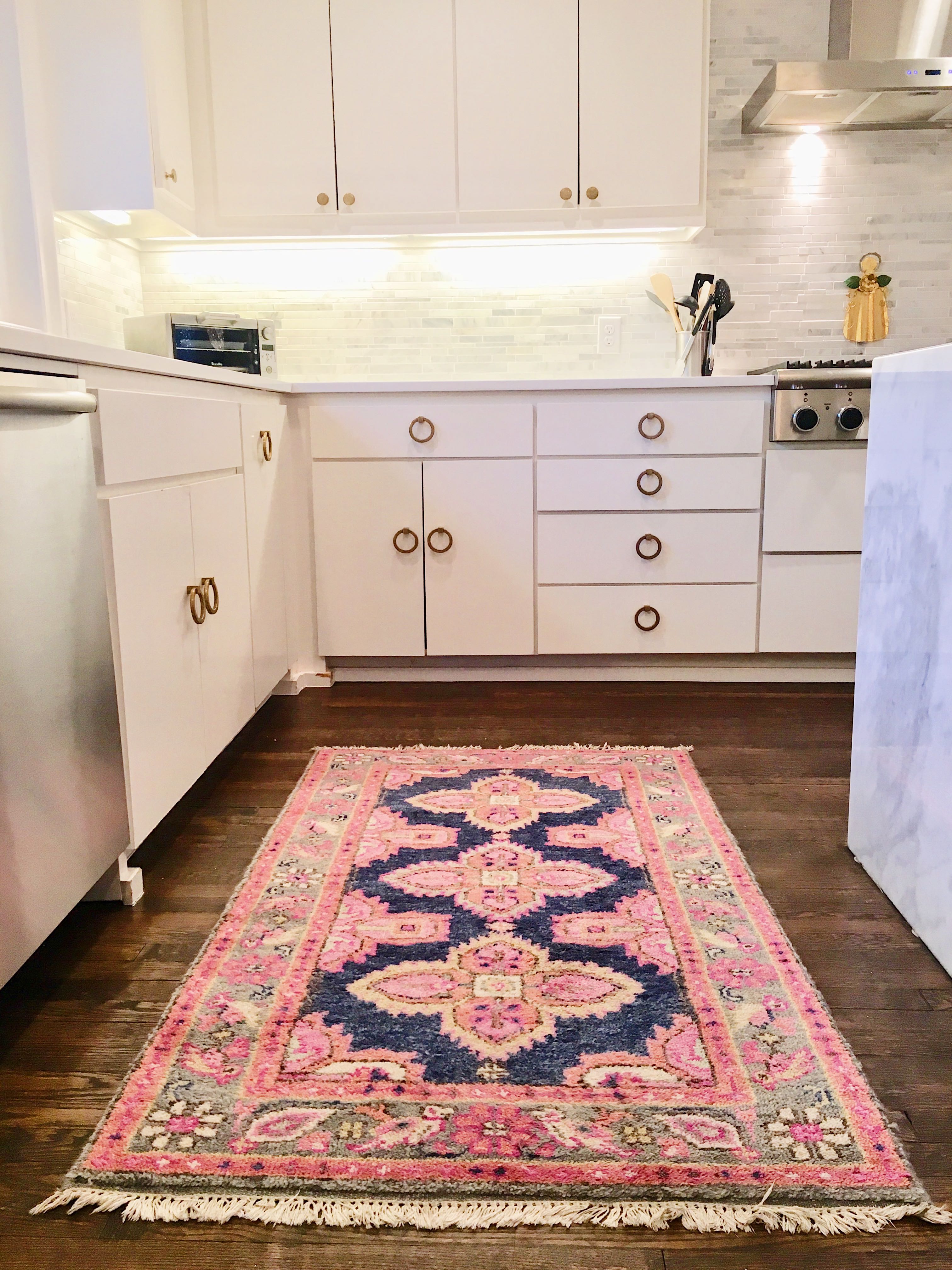 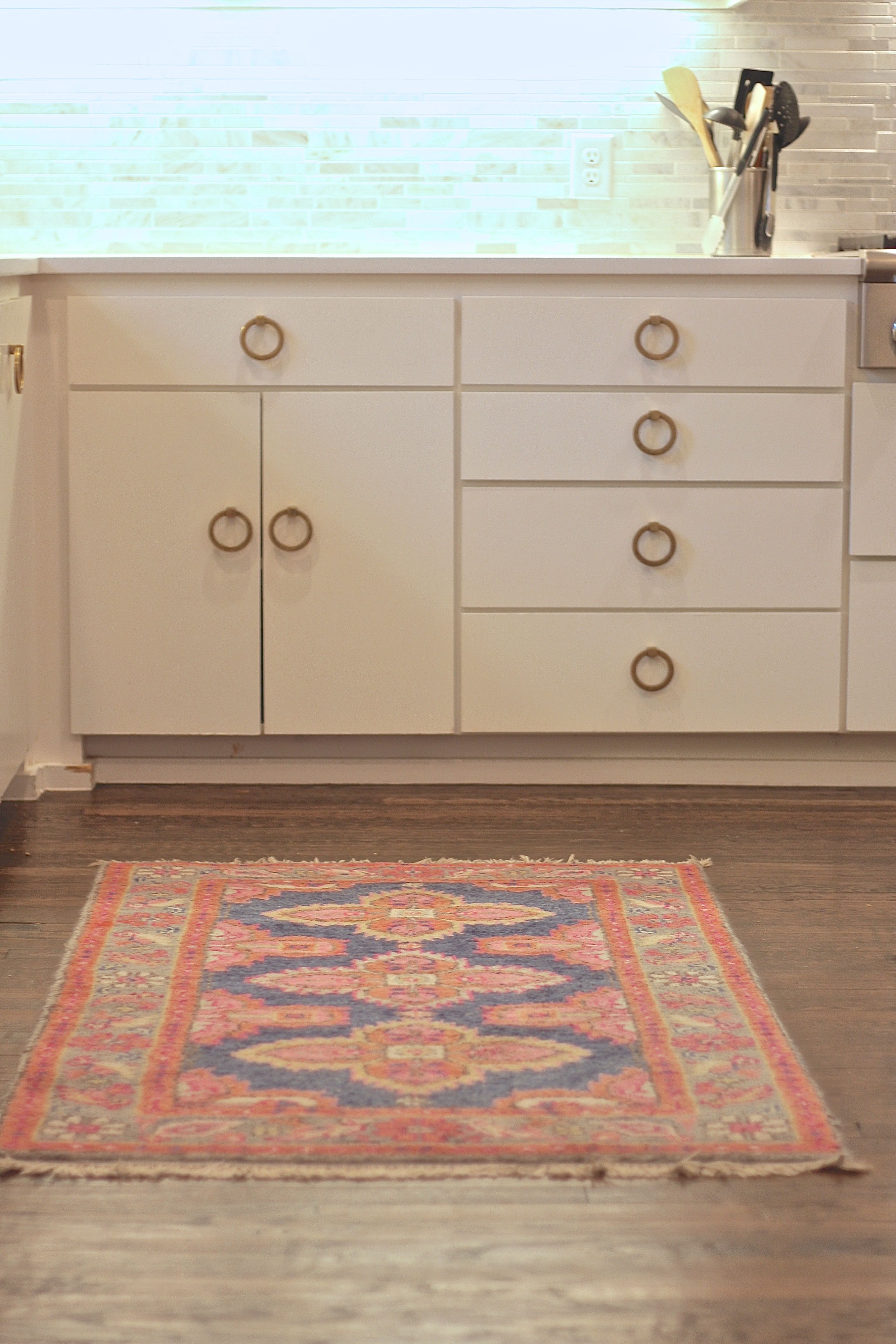 The Kismet Rug in Navy by Caitlin Wilson adds a pop of color to the space. 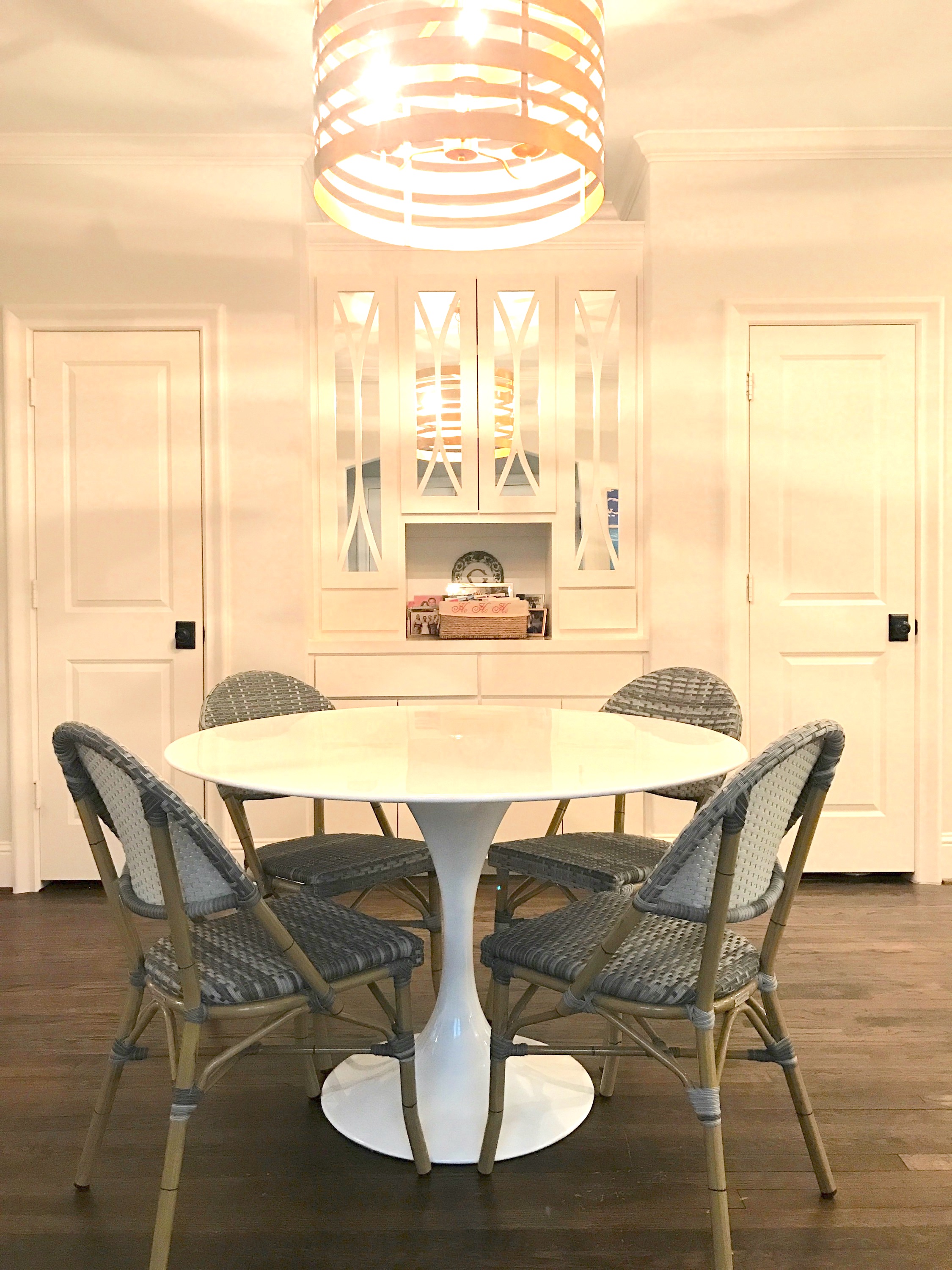 A tulip table from LexMod provides additional seating and dining space in the kitchen. 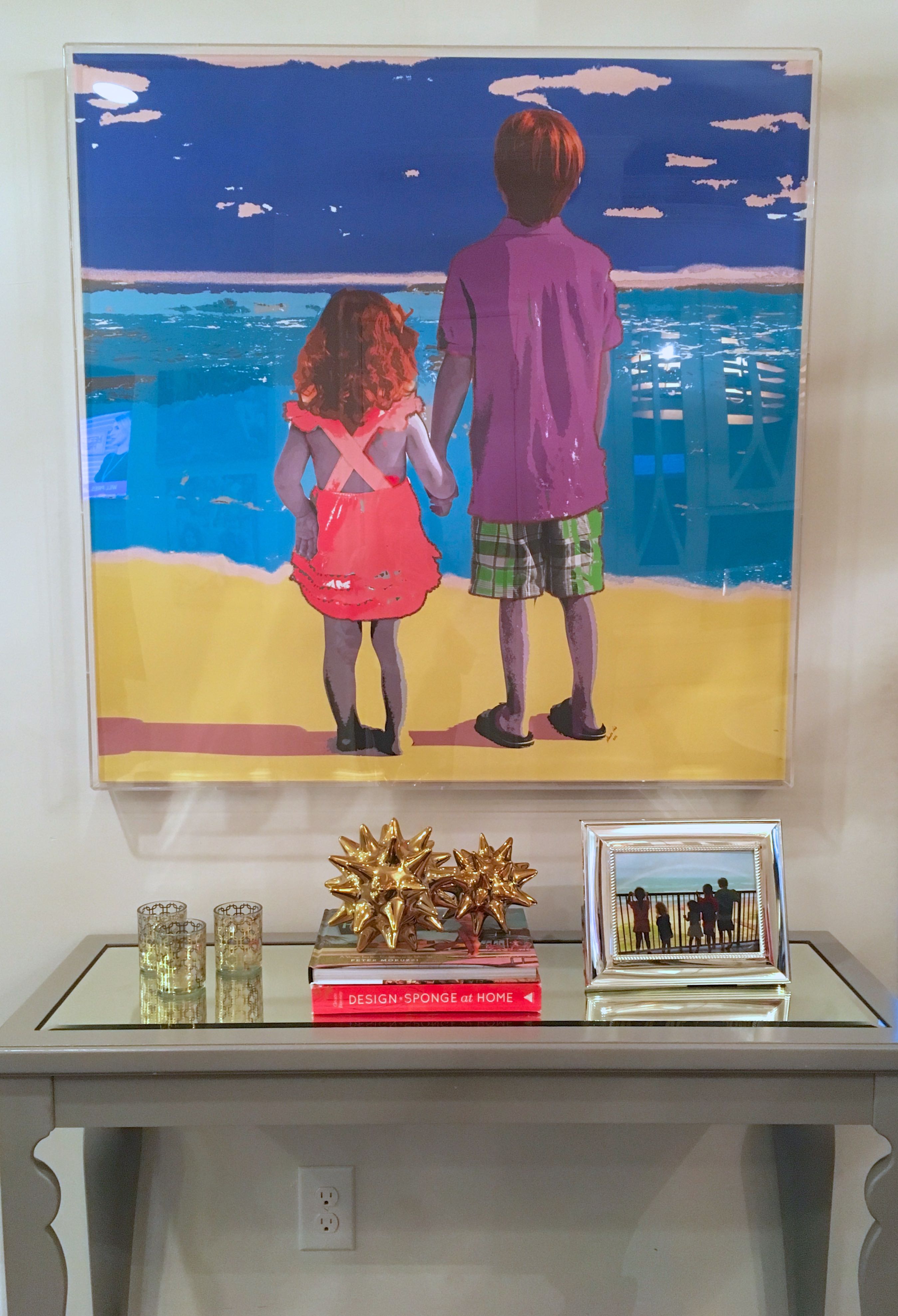 Thoughtfully selected artwork hangs throughout the home.  This piece is a favorite of the homeowner.  Taken from a photograph of the couple’s children on a beach vacation, the homeowner commissioned Fort Worth based artist, Rhonda Hole, to create a memorable and meaningful work of art that hangs in the kitchen. 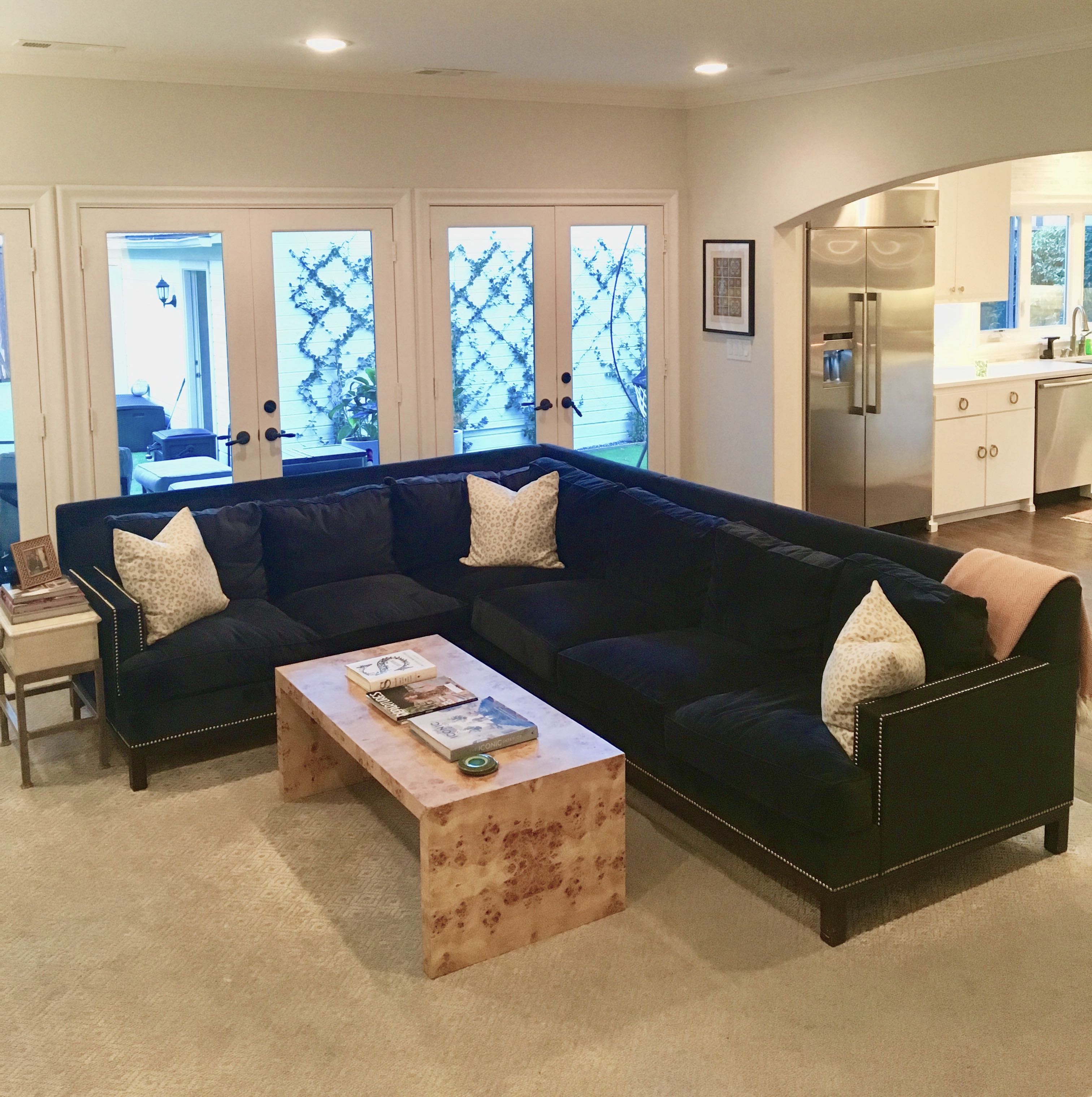 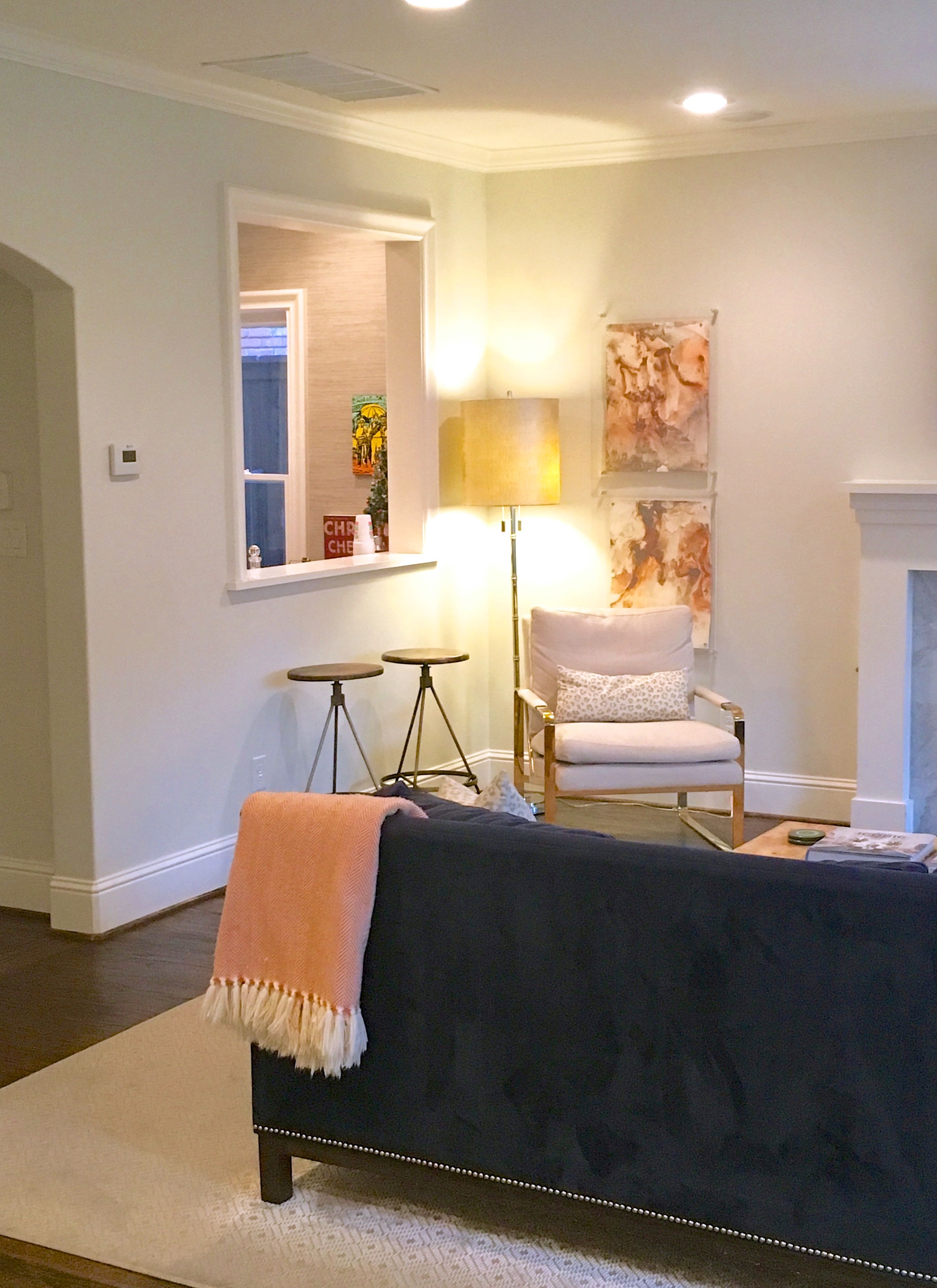 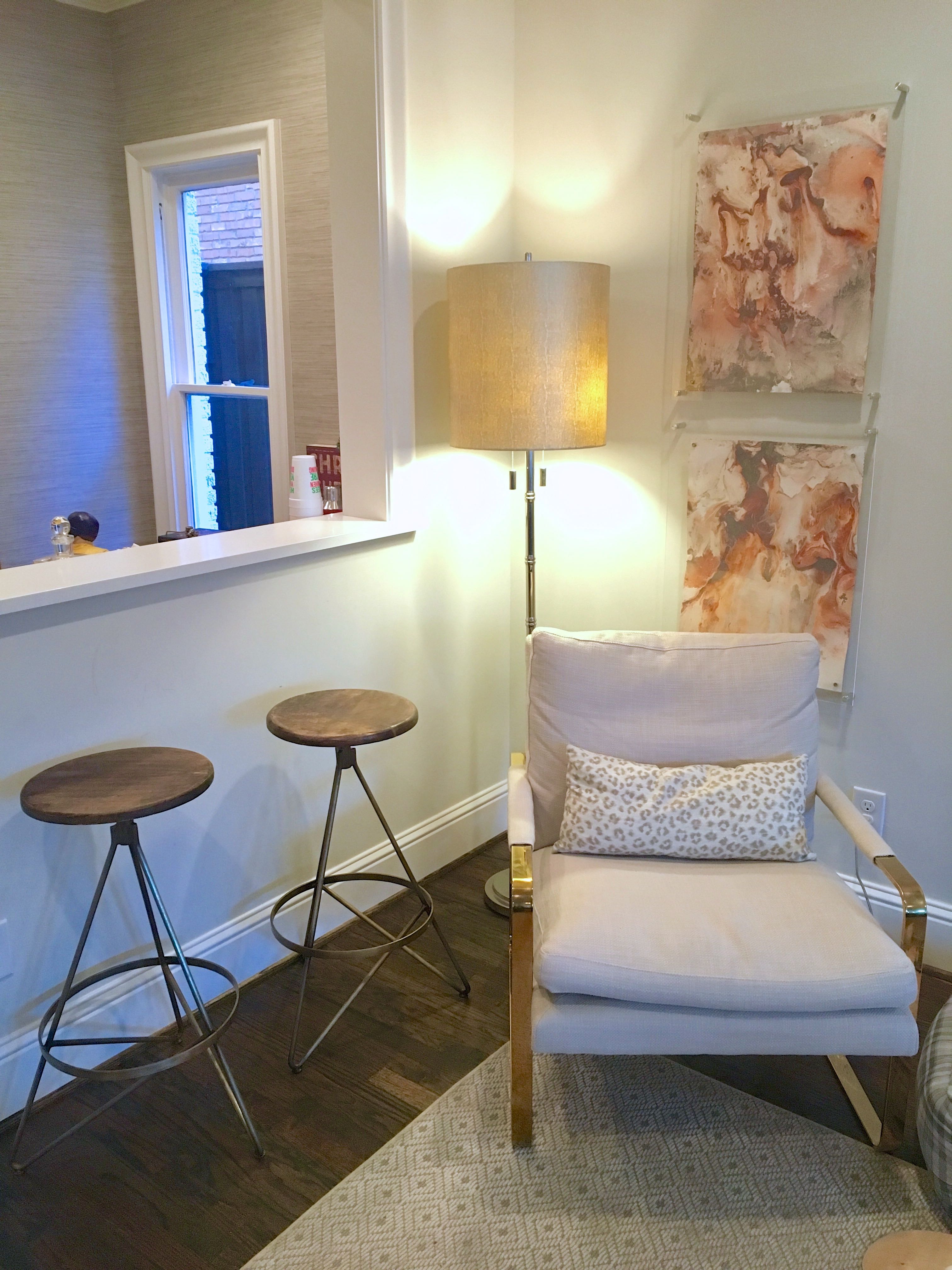 A chair from Scout Design Studio cozies up a corner of the room near the pass-through bar.  Original art by a neighborhood mom and artist, Sloane S. Phillips completes the nook. 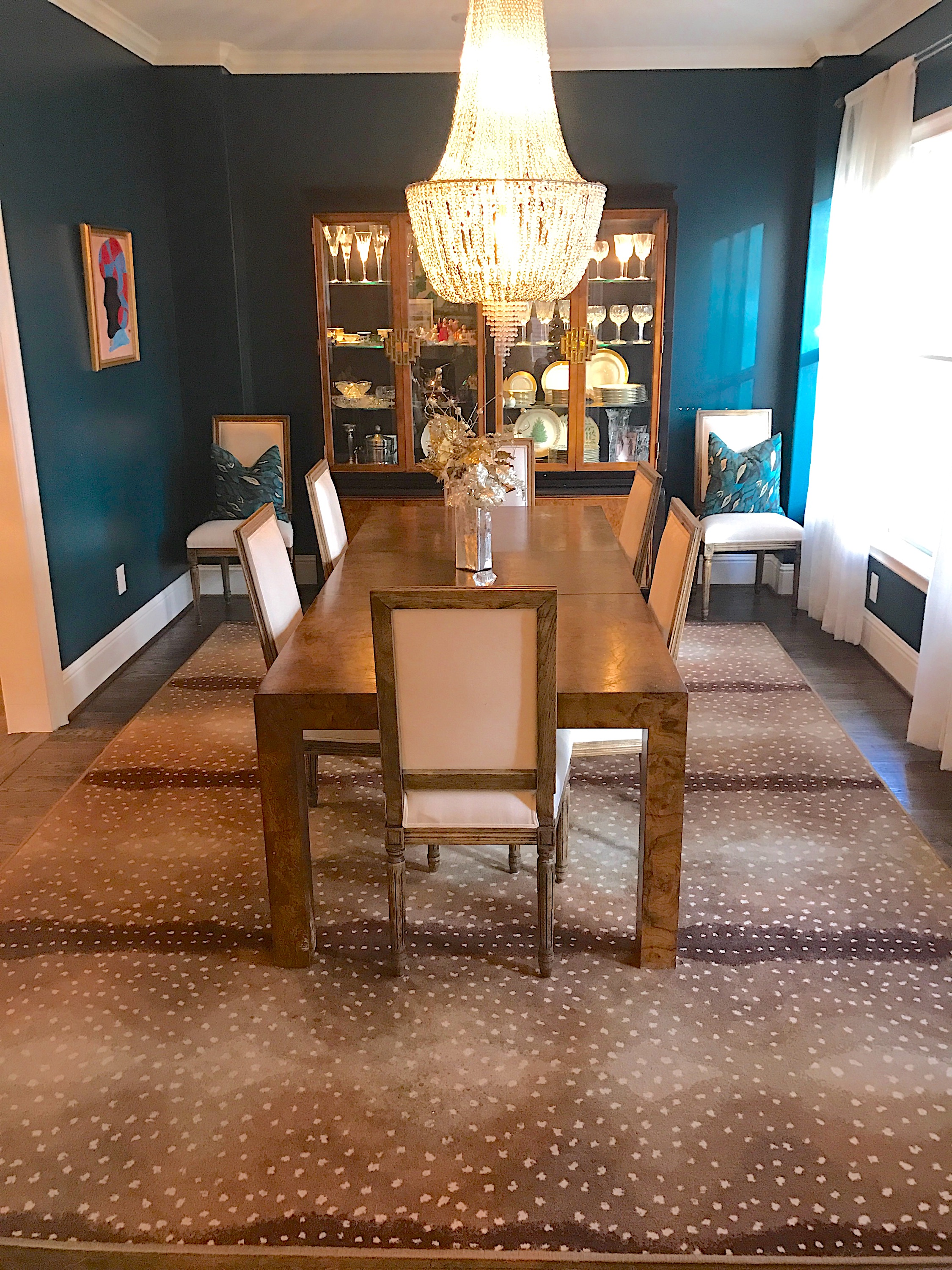 The formal dining room also gives a nod to Hollywood Regency with jewel tone walls and gorgeous crystal basket chandelier.  An antelope print rug from Sferra anchors the space.  One of the homeowner’s biggest bargain finds resides in the dining room.  The exquisite and grand Century Furniture Chin Hua china cabinet was stumbled upon by the homeowner at a local Catholic Charities gift shop. 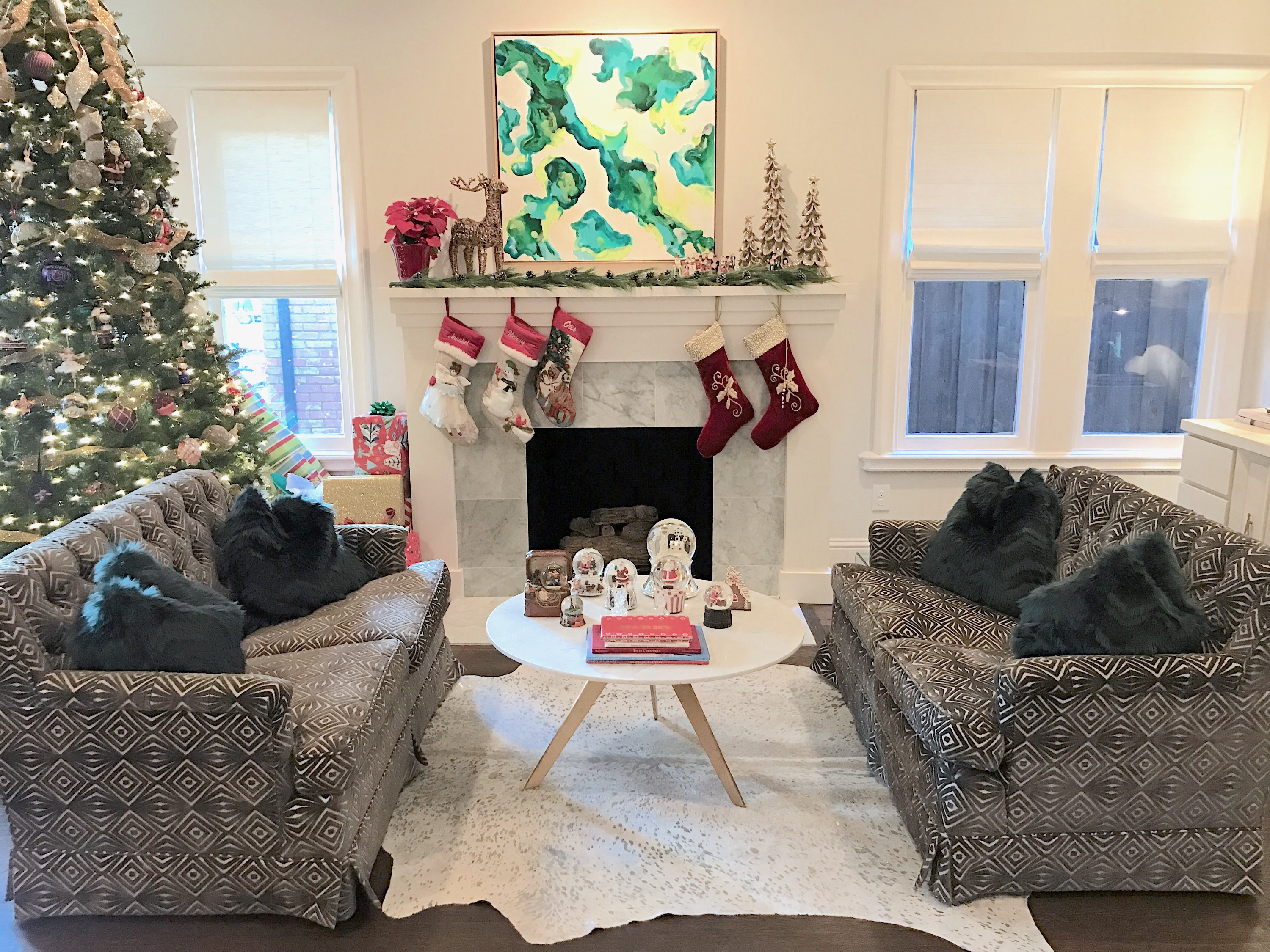 The home’s formal living room feature a pair of vintage Century Furniture loveseats.  The coffee table is the holiday season home to a collection of snow globes that have been gifted by family members throughout the years. 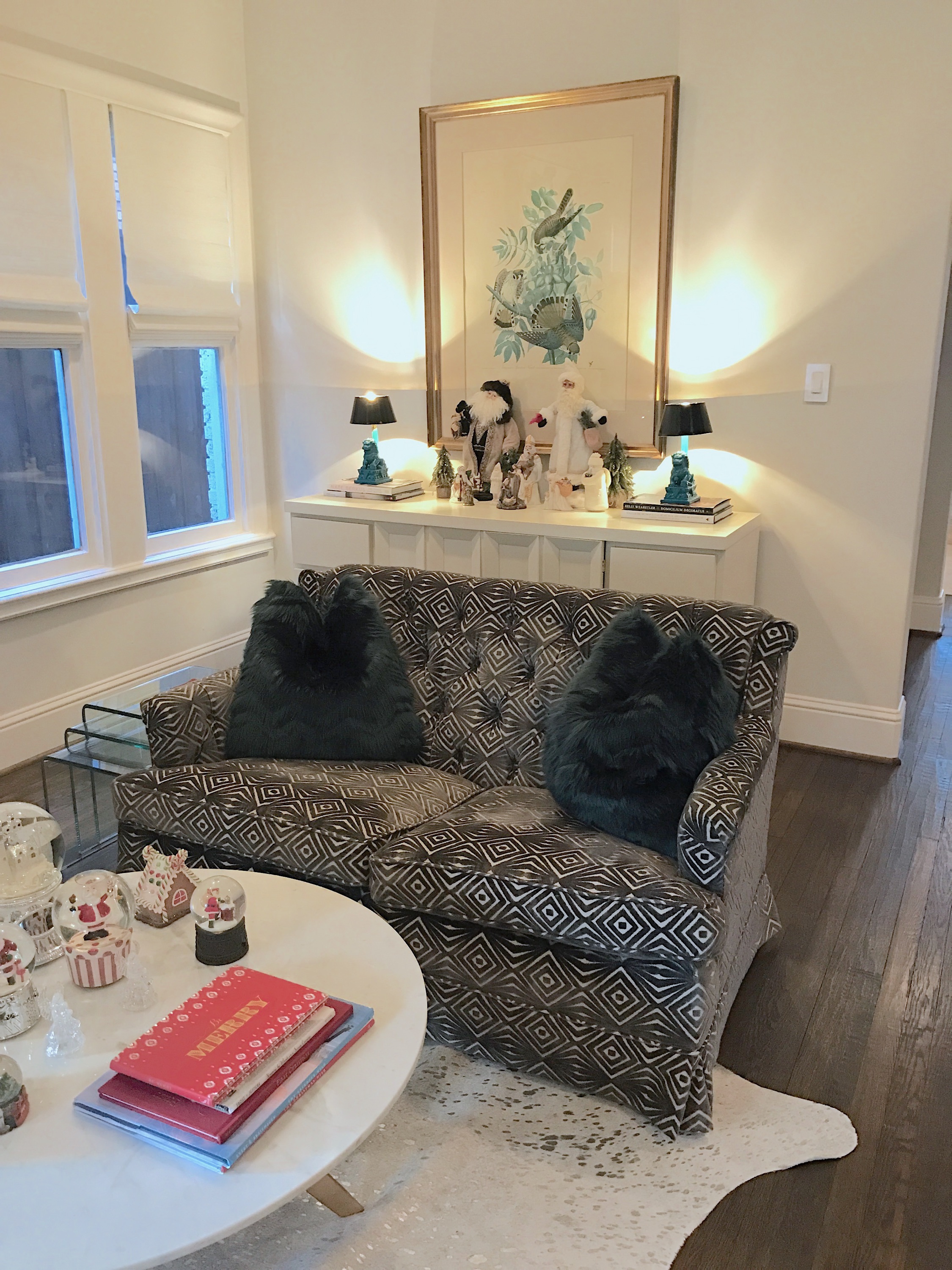 A painting by John James Audubon, passed down from family, hangs in the formal living room. 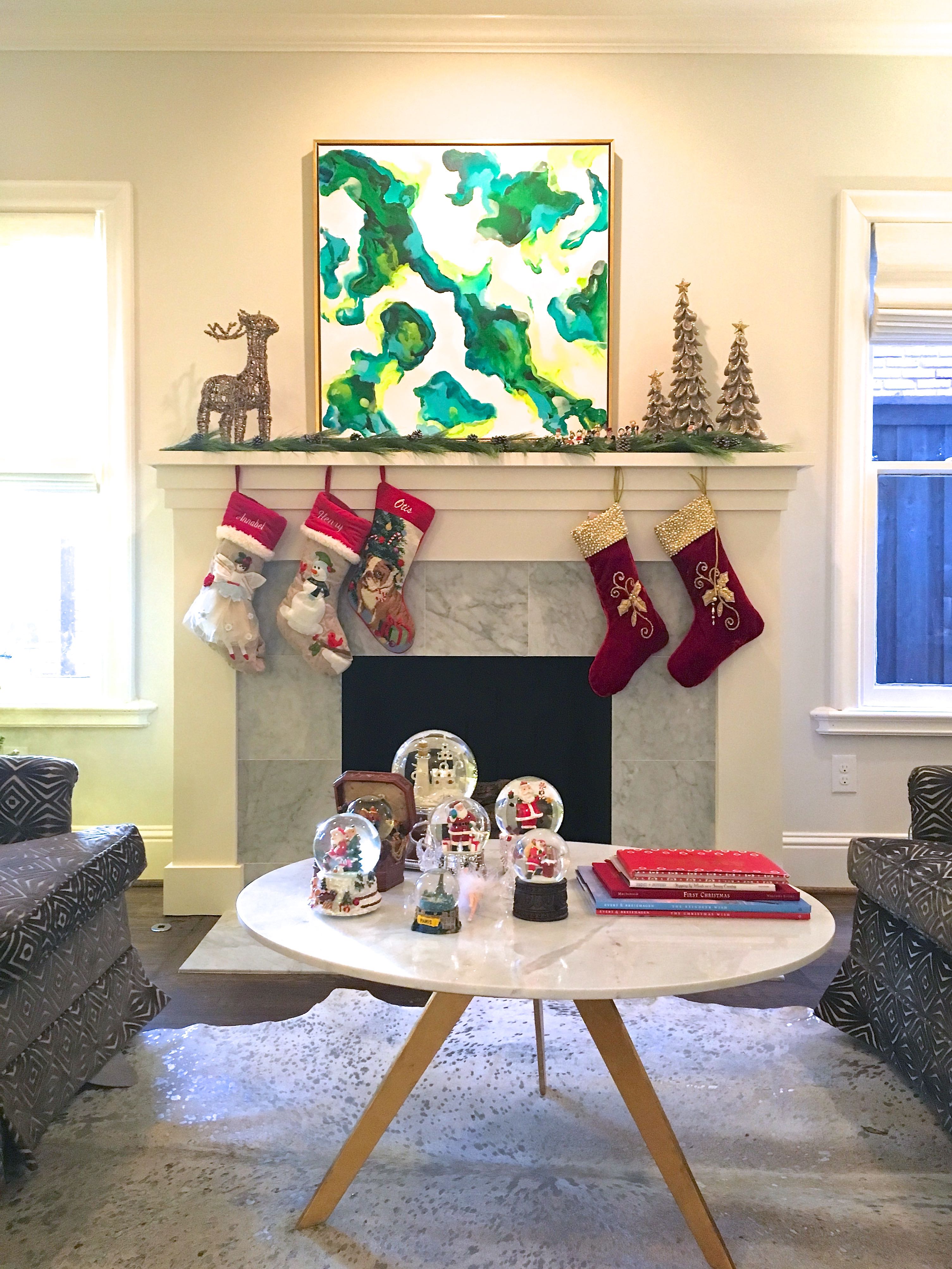 A colorful painting by Kristen Petty Down of Gypsy Soul Interiors decorates the space above the mantle. 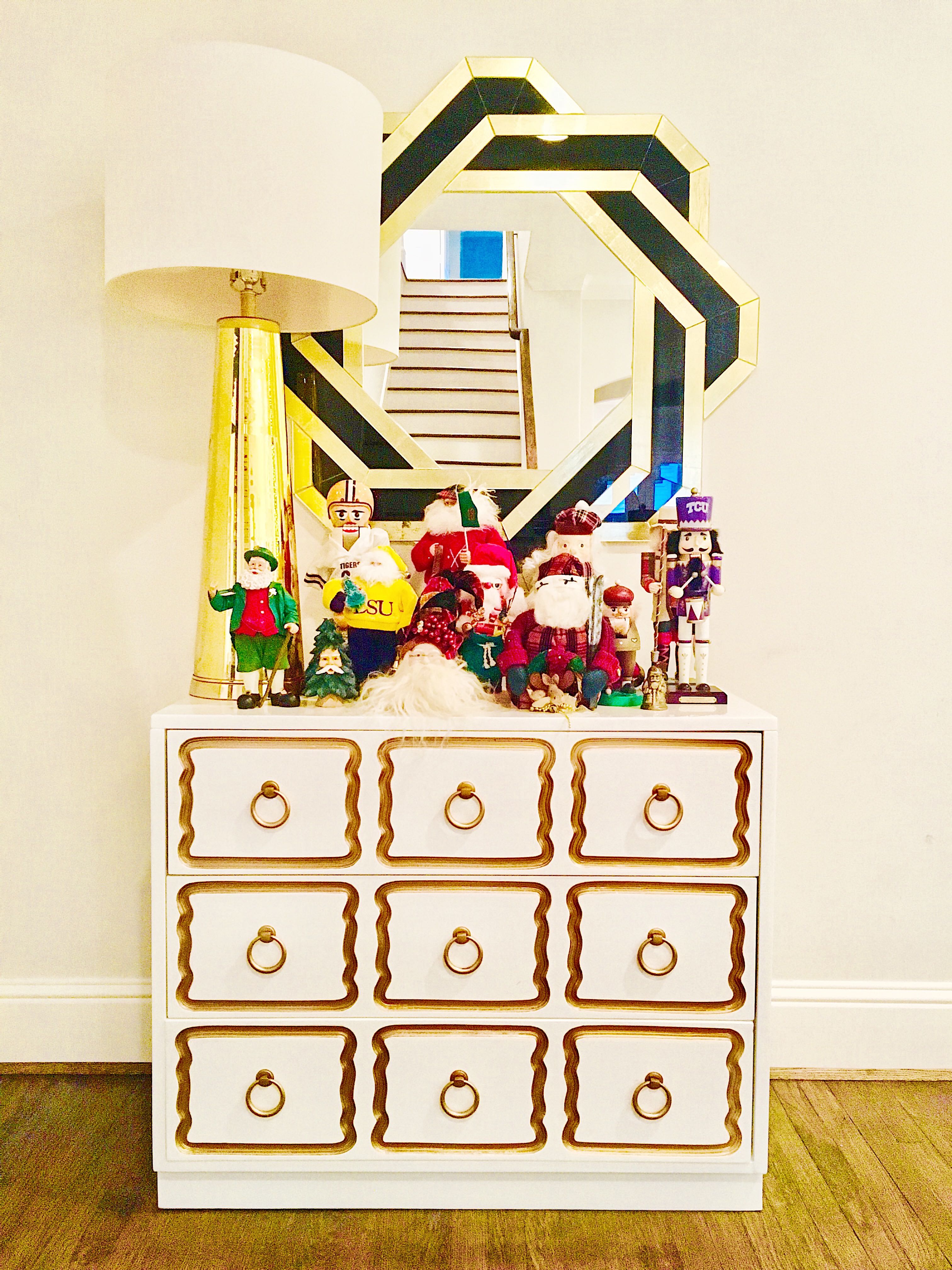 A vintage Dorothy Draper Espana chest, found in rough shape and refinished to its original splendor by the homeowner, displays the family’s collection of holiday Nutcrackers and Santas. 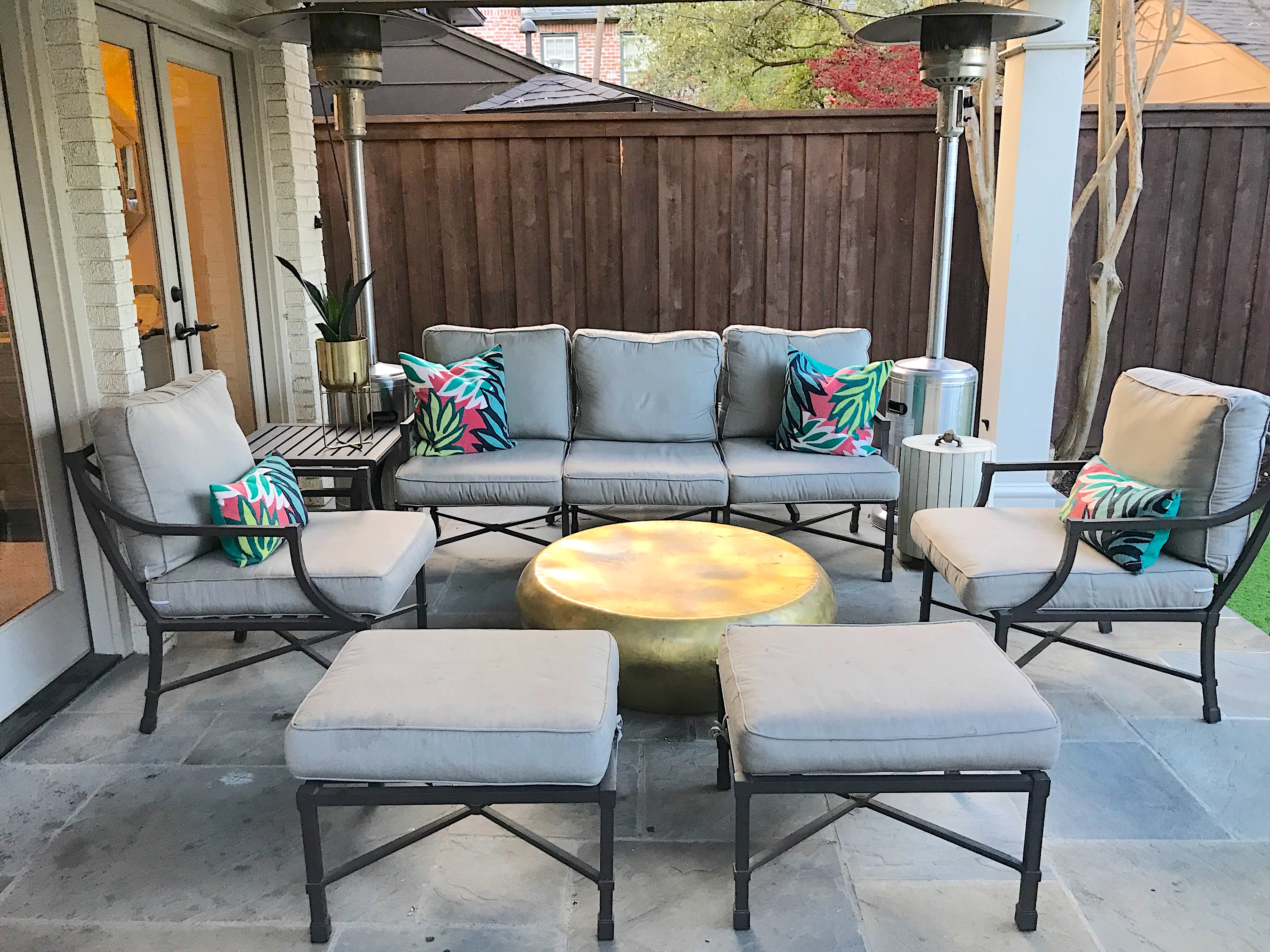 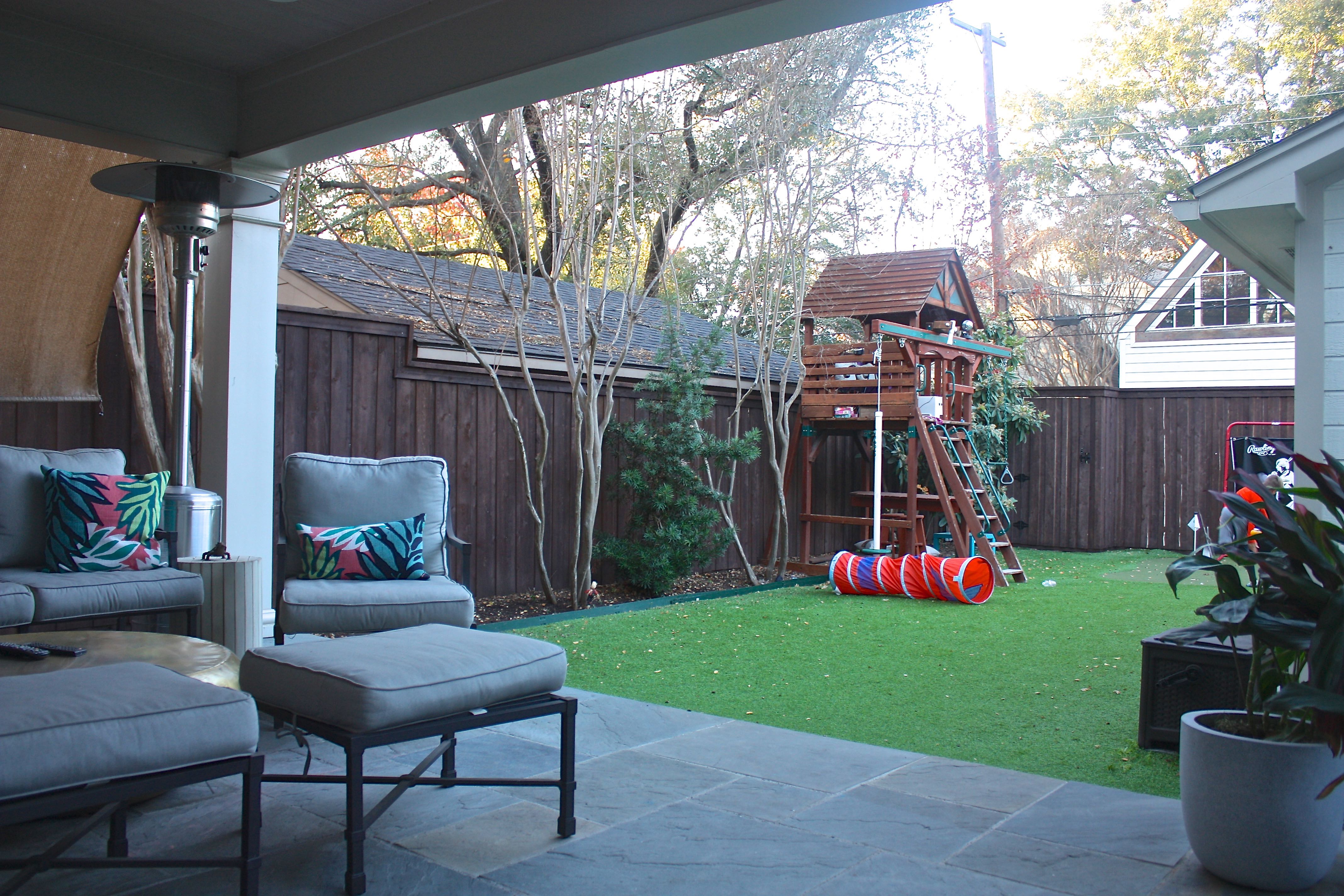 In the backyard, a stone covered patio was added in the home’s remodel, giving the yard a peaceful oasis.  Tired of dirty shoes and paws and an aggressive mosquito population, the homeowners added turf and a putting green to the backyard space.

With a home decor style described by the homeowner as transitional and, jokingly, schizophrenic at times, they have created a space that is both beautiful and sophisticated yet has a comfortable and lived-in feel that is perfect for the young, active family.  The homeowner draws inspiration by browsing home decor blogs and magazines.  Their love of the Hollywood Regency style can be seen throughout the home but is offset with traditional pieces making the home, in the words of the homeowner, “not too modern and not too traditional.”  It is obvious to all who enter this home that much thought and consideration has been given to create this personalized and lovely space in the heart of Dallas.

Thank you to my sweet friends for letting us take a peek into their space!